Steinberg - please consider adding a “Add Insert” Operation to the Track Action Target that allows us to add a specific plugin as an insert to the tracks selected by the filter. This will allow us to quickly insert favorite plugins from something like a Streamdeck / Metagrid in one tap.

Really appreciate the love given to the PLE in Cubase 12! PLE is Steinberg’s secret weapon! That being said…

I would love these features:

tl;dr =============================================
Reason:
I recently picked up a gig mixing a church’s Sunday service music for online release every week. Because turnaround time is EXTREMELY tight, I have to mix all 4 songs in a single session. While the various instruments can get away with riding the same basic mix setup throughout (with some automation tweaks), the vocals REALLY benefit from being split up on a song-by-song basis.

They send me 30-some-odd tracks every week with names formatted exactly the same way each time. So, I’ve written a MONSTER set of import macros and PLE presets that distribute the imported audio events throughout my mix template, explode out the vocals from their single-channel imported stems to dedicated tracks for each song, and trim/delete the unnecessary overlap.

It’s really a sight to behold. 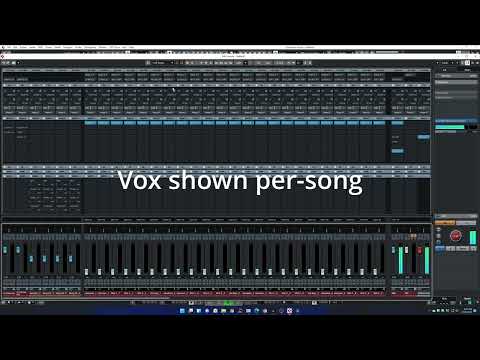 Anyway, it would be really annoying to have to use track automation to ensure my lead vocal group sends to the proper song’s vocal FX buss at the right time. Thankfully, that can be taken care of automatically using a Generic Remote. I’ve set up a loopback MIDI port and created a remote device to listen to a MIDI track in my template. This MIDI track has notes that trigger the remote device to enable/disable the appropriate vocal FX send in the right place at the right time based on the location of the playhead. This works flawlessly, and it’s really awesome!

Generic Remotes seem to be the only devices capable of addressing discrete track send slots in Cubase.

The problem is… the way a Generic Remote identifies tracks in your project seems to be by “number in your track list” rather than by a track’s “christian name” (even though it displays the track name to you in the editor). It’s pretty obvious why this is a problem. If you’ve set up your device to control track 5 - Lead Vocal - well, you’d better not create a track ABOVE that…ever. If you do, “Lead Vocal” would then become track 6 and you’d then become screwed. This happens to me constantly as my mix develops, and it well and truly blows.

ONLY PLE CAN TACKLE THIS PROBLEM Because only PLE can be programmed with the logic necessary to find the right track BY NAME and manipulate it in the right way (at least without a ton of work on the back-end from the Steinberg code monkeys). However, PLE needs to be able to address discrete track sends like Generic Remotes can rather than being limited to enabling/disabling ALL track sends at once like it does now. If PLE could do this, I could write a macro to engage the appropriate FX buss send, set my Generic Remote to trigger that macro on MIDI note-on, and put that note on a MIDI track folded up with my arrangement track’s song markers. Add a little “group editing” and bam. All I have to do after I import stems is set the song markers to the right locations via dragging the corresponding folder track events. All buss routing happens automatically and behind the scenes. Problem solved.

Like, I dunno why I can tell PLE to deep-dive into Cubase prefs and toggle some crazy obscure entry…but I can’t tell it to bypass Send 1 on my Lead Vocal group track.

Furthermore, it would ALSO be very annoying to have to chase the playhead with mixer visibility presets just to keep on top of what song is currently playing. Thankfully there’s a way to take care of this automagically as well using a method similar to the first.

I’ve set up another generic remote to listen to the same MIDI loopback port as the first one (different notes). When it hears certain MIDI notes from my control track, it’s set to trigger macros that change visibility presets in my mixer to display the right song. This also works extremely well.

Problem is… The only thing that separates Project window visibility presets from MixConsole visibility presets is window focus. That is to say, they don’t have discrete commands. That means you need to be sure the right window is selected before you send your visibility preset change commands or you’re going to be sending the wrong command to the wrong window. This mistake is WAY too easy to make.

The workaround for this is to first have the macro “bring to front” the project window, THEN select the MixConsole, and THEN trigger the visibility change. However, this leads to unpredictable behavior as the window you’re working in can suddenly lose focus while you’re trying to make an edit or adjust a parameter.

There needs to be a way to reliably send visibility preset changes to the mixer OR the project window directly and silently without having to worry about your workflow being interrupted by windows losing focus or jumping around the desktop.

While we’re at it, there also needs to be a dedicated “bring to front” command for all regularly-accessed Cubase windows - for the various mixer windows at the very least. A combined command that opens/closes/brings-to-front depending on the context is DEFINITELY NOT the same thing (ask any coder).

Anyway, ya. Cubase rocks. Show me another DAW that can do this kind of thing (well, maybe Reaper…But, no thanks). Even with these “quirks”, I’m able to automate away hours of tedious setup. Pretty great! I’d just love to take it all to the next level.

All praise the mighty PLE.

Time Delay - Be great if we could use a PLE to create pre-defined values (negative or positive) to set the Time Delay value of selected Instruments or MIDI tracks. So we can save them to keystrokes.

This would make it much quicker when syncing Orchestral Libraries to the grid, using the Time Delay feature.

just to add to this amazing thread:

It’s still not possible to unhide and select a track in one PLE action (to recall a specific instrument within a large orchestral template). You have to setup two separate actions for each track you want to recall. A hidden track doesn’t get selected, so post processing won’t help either.
Creating a macro doesn’t solve the problem, as it would just create another set of files. For a 100 tracks, you would need 200 PLE presets and 100 macros. It’s easier to sequence PLE preset directly in Metagrid (or whatever you use to trigger macros). I hope PLE will allow transforming and selecting in the same preset.

Yes this is an issue, I know for certain the devs are aware of it, hopefully they can figure out a way to create some sort of index file similar to how MediaBay works

Anyone who has already picked up c12 know if this has been fixed?!

Would love to know if this has been fixed - currently wait time is around 15mins for a PLE preset to load or for cubase to work through the “menus” section of startup! It would be a big reason for upgrade for me.