Changed over from Samplitude 9 to Cubase 7 Elements because of platform change to Mac. I run “Mountain Lion” OSX.
I am recording live vocal music, multiple tracks and I am used to do quite bit dynamic volume adjustment in the post processing and mix down session. In Samplitude I was used to “draw” a volume envelope into the track to fix up the mix, cut down applause, … my son running Cubase 7.5 Artist on a PC does the exact same thing simply by using the pencil tool in Cubase, on my Mac running 7.0 Elements I simple “don´t get it”. When I drag the pencil into the wave display it creates “events”, gray boxes, with zero volume and no wave content. Hard to believe that “envelope volume edit” simply is “gone” in the 7.0 version or just not working on the Mac. Tried to install Cubase 7 on my WinPC to check, but it does not let me do it, as the activation code is already used by my Mac (which is quite correct), so I am stuck finding out.
I am aware, that the automation track CAN do dynamic volume changes, but I am looking for the “in the track” option to be able to SEE the direct impact to the wave envelope. Any ideas???
Edit: Have installed Cubase 7.0 Elements on Win7 as trial and confirmed exact same behavior as on Mac.
So for NOW I conclude the “missing direct wave edit” functionality as restriction of the “Elements” version.

Any confirmation from other users?

I don’t know myself, but there are a lot of useful videos on youtube with Cubase tutorials. Also the website www.soundonsound.com has a lot of useful information. Good luck!

Interesting, I always use the volume automation lane which doesn’t show its effect on the waveform (which makes perfect sense btw, it shouldn’t). I didn’t know there was also a way to draw some sort of gain function directly on the audio, I can see that could be useful. Let me know if you find out

Do you mean like in the picture attached? If so use the pen in the tool box and drag it down or up. 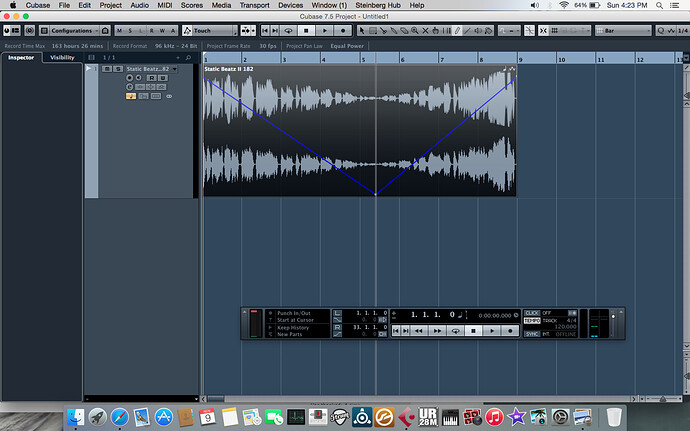