Yikes… Thats a bummer. Got an older machine wich could really run well with the 7 setup

What is your “older machine”?

I’m running Cubase Pro 12 and Nuendo 12 successfully on a first gen i7 CPU. Seriously old, but amazingly working fine - even with a firewire interface (WIndows 10 Pro).

What is your operating system? You might be able to find an older NOS boxed version if you are lucky.

Its an amd quad core. Uncertain of the specific cpu. 8 gig ram, and 32bit cpu. I’ve got Win7 or win10 available. Machine is clean currently. But its got a decent firewire setup, wich used to allow me to run my Yamaha 01x in Cubase 5

If you are saying your system is not able to run 64-bit applications, I believe Cubase 8.5 is the last version to supply a 32-bit installer.

Where are you located? Guitar Center seems to be listing a Cubase 9.5 NOS boxed version …

It doesn’t say if it comes with the USB-eLicenser. I can’t remember the exact version when the “boxed” Cubase didn’t include the dongle anymore, but this one probably does not come with it. However, if you have a USB-eLicenser from Cubase 5 it might not matter. Or, you could purchase another one before they are a thing of the past (as of Cubase 12, the eLicenser system is no longer used and has been replaced by a dongle-free Steinberg Licencing system).

I’m not sure exactly what would happen when you enter the activation code in the eLCC. I think you would receive a grace period update to Cubase 12 and retain your 9.5 license on the USB-eLIcenser tagged as non-upgradable but still usable for 9.5 or below.

Or, you could purchase second hand and make sure you trust the seller.

Or, you could upgrade you computer.

Is Cubase 5 still working for you? What does Cubase 7 have that you need?

I would seriously consider a new computer at this point rather than sinking money into outdated software. Cubase 5 has a 64-bit version. Although unsupported, you might be able to use it on a new machine.

Also, you can purchase an update from Cubase 5 for a VERY reasonable price … 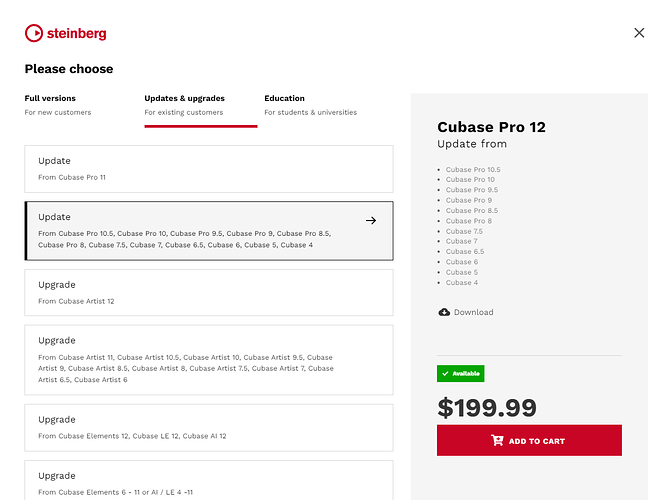 I think it used to be true that you would get a license for the version that you purchased, as well as a free upgrade to the latest version, if you activated a new-old-stock copy of Cubase, but I know that from at least 10 on, boxed copies of Cubase- regardless of how retailers list them in their catalogs- are not explicitly versioned. They directly entitle you to whatever the currently supported version is of whichever edition you purchased, with no upgrade step. Of course Cubase 11 and prior automatically granted you grandfathered access to earlier eLicenser-protected versions of Cubase.

@Ultimate_Outsider Yeah, that makes sense. I think it might depend on if the boxed copy is old enough to include a USB-eLicenser and activation code or only a download access code. I really can’t remember when they made the switch. I have a feeling the 9.5 I linked to would be DAC only/no USB-eLicenser. If in the OP’s shoes, I probably wouldn’t take the chance. Especially at that price.

US$579 is crazy money for Cubase Pro 9.5. I think 9.5 might be recent enough to be an unactivated USB eLicenser plus an eLicenser Activation Code in the box, which I would expect to activate as “Cubase Pro 11 (Grace Period Eligible)”. That could then be upgraded free of charge to Cubase 12, with the eLicenser licence remaining as “Cubase Pro 11 (upgraded to Cubase Pro 12 with Steinberg Licensing)” for older versions of Cubase.

Cubase 7 is long out of support. Any machine with a 32 bit CPU is long obsolete for audio purposes. Pretty much anything Intel put out in the past 15 years is 64 bit capable if you install a 64 bit OS. AMD have been releasing 64 bit processors for longer than Intel.