Opening the mixer in the UR816c , Cubase freezes straight away

Hello,
I 've had the same issue as many have already posted regarding audio files crashing version 12. That problem is intermittent. When opening the mixer in the UR816c , Cubase freezes straight away.
Has anyone else had this problem?
Thanks

When opening the mixer in the UR816c

What do you mean by this, please?

Are you on Mac or Windows?

Thanks for reply Martin,
The UR816c has a mixer where you can set the amount of reverb (for example) to each channel, which is saved as a scene.
When I open a project in Cubase 12 it automatically incorporates the last "scene " from the UR816c. When I try revise the settings in the UR816c (while in a Cubase 12 session) it freezes. This wasn’t an issue in version 11.

I use Windows 10 on fairly fast desktop

Once you use Cubase, it overtakes the control, so you cannot make the setup in the dspMixFx anymore.

Do the settings working Cubase, please.

Thanks Martin, but this only happens when I’m in version 12
With a Cubase version 11 running, I can open the UR816c mixer and revise a setting, then go back into Cubase .
It’s another issue with 12

I can open the DSPMix for UR44C in Cubase 12 and adjust most of the settings just fine. But they are linked with Cubase inspector and mixer anyway. 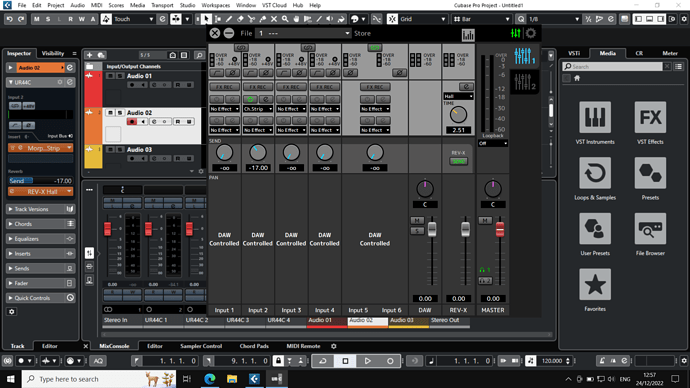 @CTripi If you create new project in Cubase 12 does it work ok?
I had problems with projects or templates created in older versions of Cubase.

Good question. I’ll start a new project and see if works.
Do you know where the " project scene " is stored? It seems to be the last scene used.
Thanks for all your help (with this post and others!)

Hi
Do you change the reverb (for example) settings in the urc mixer or in Cubase?
Thanks

Do you change the reverb (for example) settings in the urc mixer or in Cubase?

Usually in Cubase but I just tried both and it works either way.

Do you have the latest tools and firmware installed?

You may also try to check/uncheck these options. 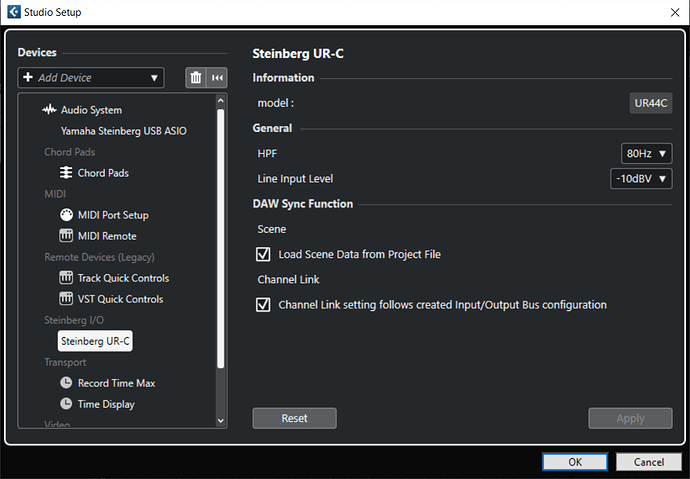 Thanks for the suggestions. I have the latest version for the ur816r.
Do you know how or when a project ties the urc settings to it? When I open a project I get the dialog box asking if I want to recall the project urc. Hmm didn’t know I set one.
Thanks again

When I open a project I get the dialog box asking if I want to recall the project urc. Hmm didn’t know I set one

The Scene Data is probably saved with the project file itself.

Check the Studio Setup (screenshot in previous post). If you check mark the Load Scene Data from Project File it shouldn’t ask and adjust the urc mix.