When I play this score , the playback is wrong at two points. That means Dorico doesn’t play the notes, which are in the score. I really don’t know ,why. I marked the notes in the screenshot , which are played wrong. It’s the g , which is played an octave higher in the repitition and it’s the d, where Dorico plays two sixteenth notes instead of an eighth note. But only, if the partiture is played, the playback of the parts are correct. Quite strange! 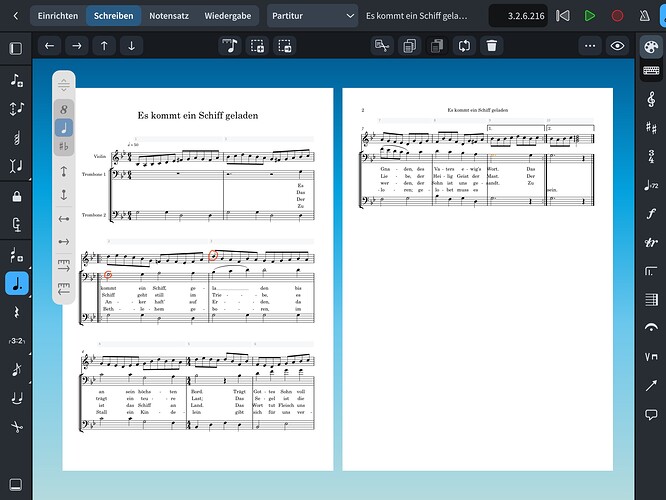 It sounds perfectly, but nevertheless it’s wrong. Dorico plays 2 wrong notes, at least on my IPad. Here is the audiorecording. Listen carefully.

Following the posted score carefully, I do not hear a single wrong note or rhythm in this audio file.

When 2 copies of the trombone sample are played in unison, it causes phase interference, which I hear a few times in this recording. The exact timing can differ from one playback to another. If the phasing is close to 50%, it makes the note seem an octave higher. This can be avoided by panning them to different locations.

If you think you are hearing two 16ths in place of an eighth in the violin, maybe it’s because of the overly consistent envelope. The transition from attack to sustain is always exactly the same, and with steady eighths it can start to sound like a sort of subdivision.

Obviously both of these effects cannot happen with human players. It’s only when notes are sampled and repeated digitally that you get these kinds of unmusical artifacts. Dorico is doing nothing wrong here.

Mark: Thanks for your answer and your careful listening. Indeed it seems to be a kind of interference between similar sounds. I wasn’t aware that these technical issues could produce other notes than the notes , which are in the score.