If I recall correctly (it’s been awhile), when I selected a swing style for playback in the Dorico 3 version I previously had, it affected all parts in the score continuously until I would switch to straight or something else. In my 4 version it affects only the measure where I apply it and the following bars revert to the previous style. I looked around in the properties panel to see if I was missing something new, but I did not see anything.
One of the current pieces I am working on has a D.S. al Coda. When I first played back the chart, the music did not return to the designated segno and continued directly to the coda. Originally I used the written out D.S. al Coda and later switched to just the symbol. Now it plays the map properly going back to the D.S. and goes to the coda at the coda symbol. I like that it is now playing back to my satisfaction, but I don’t know why or what happened.

If you want the whole project to play back in a particular rhythmic feel, the simplest way to do this is to use the Rhythmic Feel page of Library > Playback Options to choose one.

If you’re finding that the rhythmic feel is getting unexpectedly reset, unfortunately there’s no way for us to say why that might be happening unless you attach the project itself here, along with details of where we can hear the problem occurring.

Thank you for getting back to me. I am trying to incorporate straight and medium swing 1/8’s in this piece. Everything is straight with the exception of two sections where I would like to have a swing feel. The first one starts at bar 23, the bar before rehearsal mark C, and keeps that feel through bar 29 with the exception of the last eighth where it returns to a straight feel. Then the repeat should swing, too.
The second point where swing recurs is the second beat of bar 42 and continues through bar 48, again with the exception of the last eighth in that bar. Then, as before, the repeat swings before returning to a straight feel.

You might need to re-apply your playback template since I used Noteperformer.

Thank you for taking the time to do this. I am now getting the desired effect, but more importantly, I’d like to know the process.

If you turn on View->Show signposts you can see what I did.
Basically, you need to have swing at the end of the prima volta. 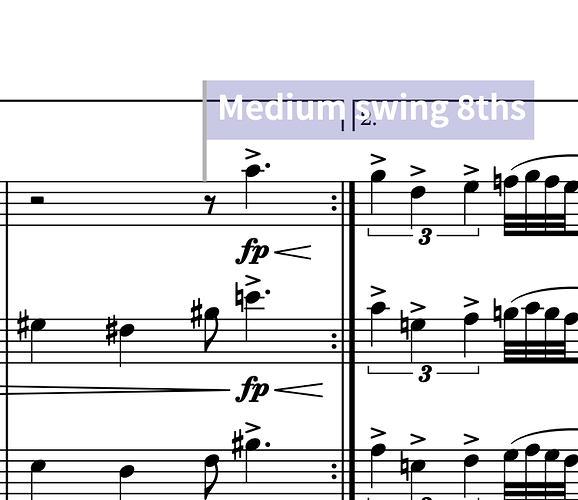 I have been going back and forth with that prior to bringing up the subject in the forum. Your observation is the impetus for me to make that little tweak. Thank you!