Positive impression of the demo from RX user

I’m liking it. I’ve only used it as an extension in cubase, but I really love being able to quickly open an event to get an accurate view of nasty resonances in guitars, midrange hotspots in vocals, inconsistent bass notes, over-zealous hpf-ing etc. It’s a quicker workflow than opening up the audio editor and sifting through a list of plugins to find rx connect, then playing the file into rx, then opening rx.

I like the selection tools, esp the transient tool (easily attenuated a lot of harsh snare transients on a mastering job that would have taken a lot longer in rx), the frequency tool, and the harmonics tool. I need to dig deeper to see if there are shortcuts to quickly apply processes to selections without having to go into the menus.

The spectral display seems to provide more resolution and snappier zooming than rx. And it’s great that the cursor in the cubase project window follows the spectralayers cursor.

Sure, there’s a lot of bugs with the ara2 interface - can’t use 64 bit audio engine, can’t have loop enabled in cubase, lanes don’t work, cursor return to start on stop doesn’t work, had to play around with openGL settings to get it to display properly - but I think this still has some utility in it’s current state, and will be an incredible time-saving tool for mixing and mastering in cubase once all the kinks are ironed out.

Same here! I own and use RX7 Advanced often but I do really love Spectral Layers 6. Just having the ability to select with a feather is really cool. With RX, when you select, you don’t have any parts that are partially selected. RX is where to go for restoration plugins, but for good complex selections, Spectral Layers is the best.

Will be perfect when the bugs (mostly the playback/pause bug) is taken care of.

I haven’t played around with feathering selections yet! Will check it out. I probably should read the manual

It’s surprisingly intuitive, but I’m probably just scratching the surface of it’s potential with what I’ve stumbled across so far.

On another forum a couple of years ago, one person posted that the major difference between SpectraLayers and RX (in as far as RX’s spectral processes go) was that SL was much more geared to “surgical” repair of audio. I agree with that post (which wasn’t mine I should point out). While I have a very high regard for RX6 Adv, I have long used SL (since its first release) to manually remove all sorts of clicks, clangs, thumps, minor to mild wind noise, and reducing the volume of, or totally removing, screeching/over-loud voices in b/g camera audio. This has been achieved largely by using SL’s excellent clone tool as well as the amplitude process. The noise reduction process is nearly always very effective as well. RX is great in so many ways, but for surgical repair, nothing beats SpectraLayers IMO.

Re feathering, I think this is something I need to explore assuming that its not referring to the Hardness setting.

Reached the fumbling limit of my intuition yesterday on a mastering job. The client’s mix had a 10 second intro of jangly electric guitar, with audible patches of crackling in the left channel, possibly from a compressor with a too-fast release. I futsed around with the clone-stamp tool in SL, but realised it would take ages to clean up manually, removing spikes one-by-one. I gave in to the comfort of familiarity and opened it in RX, lasso-ed patches of crackling and removed them with the de-click tool, all done in less than a minute. Is there a way to do this in SL?

One patch of crackling selected in RX: 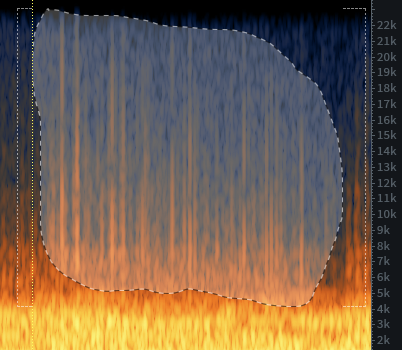 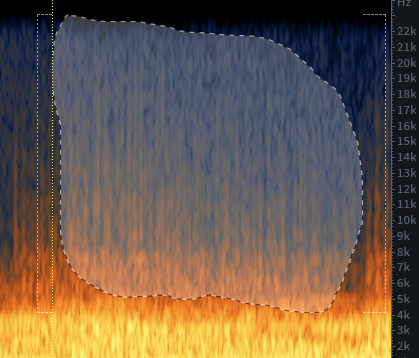 Sure - in SL, select the left channel in the Channels panel, make your selection, then click Edit > Heal and choose your Heal flavor (probably Horizontal Heal in this case).