I have Cubase 7.5.40 installed on my Windows 7 desktop. I recently got a laptop, and installed the exact same version with the only difference being the laptop is Windows 10. When I went to import my key commands on the new laptop, many of them were missing. After some digging, I realized the Cubase version on my new laptop, despite being the exact same version as my desktop, is completely missing a group of key commands called Process Logical Preset. I’ve taken a screenshot below. The group I’ve pointed to does not exist on the Cubase version on my new laptop.

I found the Key Commands.xml file that was on my existing desktop, opened it in an XML editor and verified that it does indeed contain this group. I then took this XML to my laptop and overwrote the Key Commands.xml file so Cubase would use it instead. As soon as I launch Cubase, it overwrites the key commands xml file with the version that is missing the Process Logical Preset group. If I edit the XML file and insert the missing group, save the file, Cubase immediately over writes it upon launching. Very frustrating.

I’m curious why that group is missing on the new install of Cubase since they are both identical versions. How did this Process Logical Preset group end up getting on my desktop install in the first place? 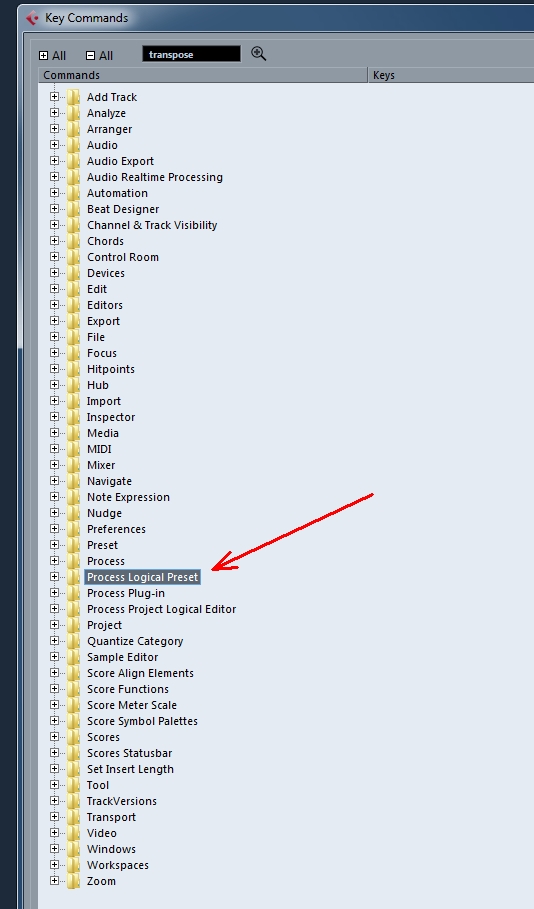 I’ve opened a support case for this. Hopefully I can get some help that way. I’ll report back with the solution as maybe it will help someone else in the future.

Support told me Cubase 7.5 is not supported on Windows 10, and that the “XML dependencies” could be different on Win7 vs Win10. Guess it’s time to finally upgrade.

I wanted to bump this old thread because I finally got around to trying the Cubase 11 demo, and noticed this set is still missing. I’m really perplexed. How did this set get into my install of Cuabse 7.5, yet it doesn’t exist in any re-installs of 7.5 or even the latest Cubase 11? Is there any method of exporting these or adding them in some way to Cubase 11?

Have you done the first steps of troubleshooting? Cubase Safe Mode, and:

Troubleshooting for Cubase, Nuendo and Sequel on Windows

The following troubleshooting tips and instructions apply to all current versions of Cubase, Nuendo and Sequel for Windows - with minor changes or limitations also to earlier versions. Updating th...