problem after problem with V12. overloading happens way too often, stuttering and audio dropout has become a much bigger issue and to top it off , cubase wont even shut down properly anymore, its hit & miss as to whether or not to ctrl, alt & delete and shut it down in task manager, this is supposed to be a professional DAW

I should add that my system has been optimised for audio performance, there is nothing else I can do to ‘tweak’ my systems performance (its Windows 11 , 12 core processor, 64GB RAM)

Cubase 12 is really bad with processing overloads. The audio drop is crazy and then update it to 12.0.5…it became even worse! I can’t even do anything. I have never had such issue with Cubase for the past 15 years.

I put the USB cable back in and the symptoms seemed to be alleviated. but the problem is not solved.
SampleTank 4 Crash Cubase Pro 12 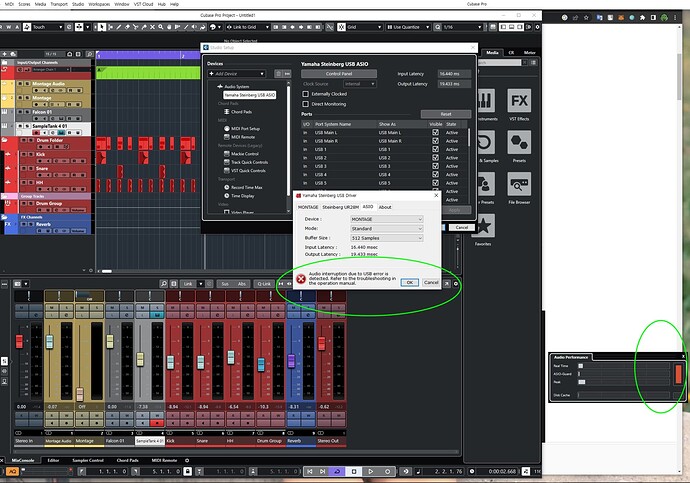 Same problem of processing overload on cubase 12.0.10 on a brand new i7 with 16go ram. Anyone found a solution ?

Could you let us know a little more?

Is it a machine bought from a store, or did you build it? If it’s from a store, uninstall any applications which you don’t really need.

Make sure you select the Steinberg power scheme.

Are you using a USB interface or Thunderbolt? I’ve heard TB interfaces can cause issues, especially if using something like an adapter. My previous one was like that, using a TB2 to TB3 adapter and I believe it caused some overload spikes.
USB interfaces seems stable for most and reduced my spikes.

Not sure what the Yamaha Steinberg USB Driver is showing, in terms of you knowing that it’s SampleTank4 that is causing the crashes. When you say ‘crash’ do you mean Cubase freezes, closes etc? Or that you get sudden overloads with audio pops/drop-outs etc?

On a separate point: I have stopped using SampleTank4 and all IK Multimedia products for now, due to the amount of crashes it caused me and wasted time trying to resolve constant issues, even with the help of IK support. It’s just so unstable (although more stable on PC than my Mac systems).

Hi, and welcome. If you are only having problem with Spitfire, it may well be an issue related to Spitfire. Have you contacted the developers for advice.

There can be a number of reasons for Cubase processing overloads. Could you provide your computer specs, audio interface (including whether it’s USB, Thunderbolt etc)? Are you on Mac or PC? There are some tweaks you can do to BIOS, as well settings in the OS, such as Steinberg power management etc. However, those tweaks didn’t help me and Cubase actually runs more stable without messing about with BIOS, at least for me anyway on the PC.
On my Mac, I still get the occasional processing overload spikes, but much rarely.

For my PC it was a change of audio interface. The extremely fast low latency Thunderbolt interface was giving me overload spikes. I changed to a USB-C interface, as well as an older USB 2 interface, and my spikes were much less! I can live with the added ms of latency if it means less processing spikes.

Of course there is Cubase settings too. Are you using ASIO-Guard. What are you Buffer settings and Sample Rate?