I’m using Cubase 7.5 and suddenly ran into a weird problem that just occurs within one of my projects. I run windows 10 and my PC is brand new and doesn’t even go close to maxing either CPU or RAM, so I doubt that would be the problem here.

For some reason I suddenly have a 1 second delay for each note I want to input with MIDI. Both through my keyboard and if I enter or click notes directly in the note editor. The same thing happens when I want to press playback, there’s a 1 second delay before the playback starts. This doesn’t happen in other projects when I open them.

Furthermore, Cubase keep changing some of the connections between my MIDI Tracks and Rack Instruments. For example, one of my percussion tracks were suddenly connected to my trumpets instead. In my VST Instrument window, the numbers don’t match anymore, as shown in the picture below. The Kontakt instance says it’s number 18, but in the VST Instrument window it is shown as number 15.

I also have one of my instruments being very low in volume each time I start up the project, then suddenly it’s volume is increase the second time I play back the track. I just don’t get it.

I created this project on my old PC, running Cubase 7.1. Could the problem be that I now run it on Cubase 7.5? It has been working perfectly for over a week though, and this just started happening now though. If that’s the case, what is the most efficient way to port everything over to a brand new project?

Thank you in advance for any help! 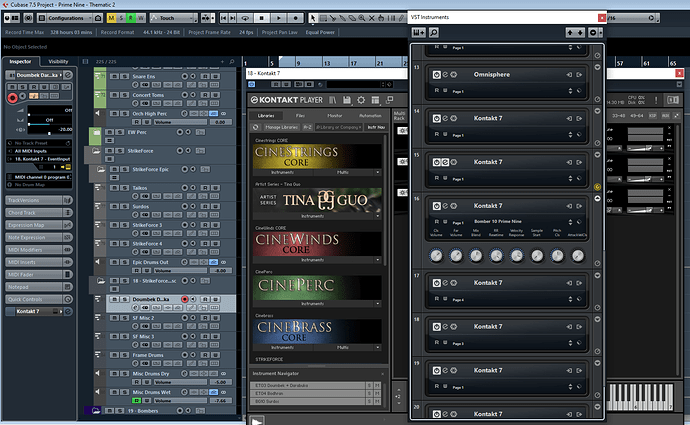 Update:
Just realised the latency is removed if I activate “Constrain Delay Compensation [!]”. However, as I understand it I shouldn’t have that activated at all times. But it helps when playing in new things at least.

I also have gotten some CPU Overload/Dropout warnings from Cubase, but my CPU is at 5-15% of it’s capacity. But could there be a plug-in that’s not working as intended?

Just realised the latency is removed if I activate “Constrain Delay Compensation [!]”

That means you have some buffered plugins inserted to those vsti tracks, groups or master that is routed to.

Hmm okay, I see. Thanks a lot for the reply.

Though, this doesn’t seem to affect any specific plug-in or VST. It happens to all tracks no matter what VST or plug-ins I have used. Does it affect the whole project if I have one buffered VST?

If you enable the constrain delay compensation, it just bypasses buffered plugin that are in the path of vsti or record ready tracks.
The project has something in the master or output busses.

Though, this doesn’t seem to affect any specific plug-in or VST. It happens to all tracks no matter what VST or plug-ins I have used. Does it affect the whole project if I have one buffered VST?

It affects the whole project but as said, only bypasses effect plugins with latency. There’s something in your project’s master, group or on the vsti channel that is buffering signal for processing, you have to find one and just disable it if not needed.