Hello,
I have a problem with Quick Controls Automation when working with midi tracks.

I attach a picture.
My cubase is in Spanish, so “Controles rápidos” is Quick Controls.

I think this is “works as designed” and to me it makes absolute sense. Why? Well, the midi track could be rerouted to any other vsti and as soon as you do so, the parameters you can control might not be the same as in the original routing. In other words: The meaning of the parameters might be context-dependent. And: It is you who made the choice to control VSTi specific parameters in your setting in this case. If you select Midi control parameters and/or specific track parameters to be controlled by the Quick Controls they will be written to the midi track as automation lanes.

If this is the case, I will have to think in something else to control my VEPro through the midi tracks…

In general, I have the feeling that Cubase doesn’t work as well as it could work with multitimbral instruments (because of things like this, that makes controlling them a bit worse). Or maybe it is my problem, if anyone knows any workaround I should know, it would be nice if you post here

Thanks for the answer!

You can do as you want (have utomation with MIDI track), create not rack but Instrument track (there is no any difference between them) then create MIDI track and route it to you Intrument, or use instrument, whatever

here both are pointing at kontakt 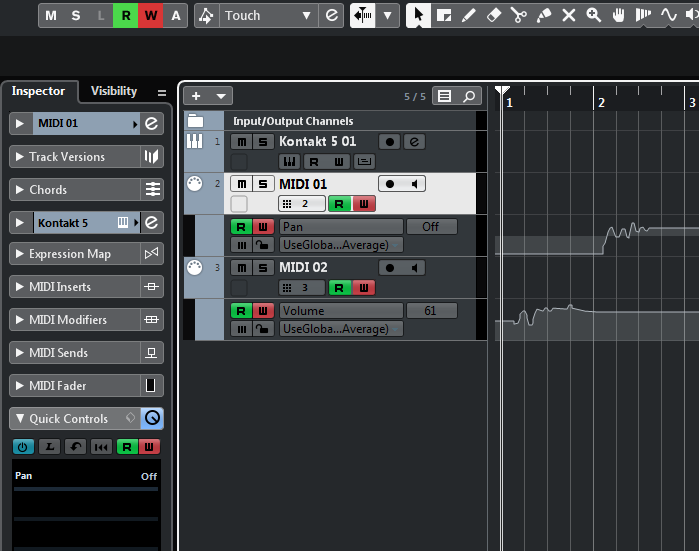 Conclusion: It is absolutely reasonable to handle things this way, because midi channels can be rerouted at any point in time and I am quite sure noone wants to lose written automation (for the originally used instrument) just because of rerouting midi.

Thanks,
I’ve assigned cc111 to 118 to the controls I wanted to tweek with the MIDI file (Volume, pan, send 1, 2 and 3 inside VEPro mixer). It works better, but it’s a lot of work so I would think in something more efficient. Thanks for you answers.

Hi resztes, have you thought of using VST-Quick Controls instead of track quick controls?

Why is it benefitial for you to have the parameters written to the midi track instead of the instrument /vst track? Actually you are controlling instrument parameters, aren’t you?

If my project was small, I would use one instrument track per instrument and I won’t have any problem. However, in large projects Cubase is not able to handle such a big amount of virtual instruments, that’s why I need Vienna Ensemble Pro to handle them (which allows me to save projects faster and protects me to most crashes). And my wish is to replicate that behaviour, which I think it’s optimal, with MIDI tracks. I think you can do something similar in Logic (at least with volume).

However, I’m testing different ways of making the template. I realized this kind of automation is not well supported neither in Cubase or in Vienna Ensemble pro.In the latter, MIDI automation is “weak”. In the former, the problem I commented before (which is a problem for what I would like to do, I understand why it works as it works, but I wish it could work also as I need it to work). That’s why I’m looking for “workarounds”.

Thank you for your interest

Thank you for explaining your situation. I see that the way things are implemented are expecially not nice for multi-timbral vst-instruments. Actually instrument tracks are not a good concept as long as one instance of a vsti is regarded as a “single instrument with possibly more than one output” instead of actually representing more than one INSTRUMENT (which is - logically/conceptually - the case).
One possible solution for cubase would be to allow a single vst-i instance to be the target of MULTIPLE Instrument Tracks.

Yes, Elien, this would be my dream come true.

I asked for this in the Feature Request forum sometimes. It doesn’t seem to be in Steinberg’s plans, however it useful will be for cinematic composers or any composer that uses multitimbral instruments. Or maybe I didn’t express myself properly…

I understand that the users of Cubase are a very large community and their needs are very different and what I ask for may interest only to a minority of these users.

I’ll try to adapt my idea to what I have for the moment, as it seems impossible to do in Cubase.

I’ll set some general automations in Vienna Ensemble Pro to control from the VST the buses of each instrument, as well as the reverb and the delay signal.

I feel with you, reztes - Sometimes I dream about automation lanes generially being “universal” in that sense, that they are considered to be another type of “signal” (just like midi and audio) that can be routed freely and assigned freely and controlled freely. That would solve a lot of things but on the other hand make the program understanding quite complex. A general issue with many software products these days is that the “normalization” (clarification of “what is what”/object-Types) is not done properly. The awareness that a single physical Vsti can be a single “logical instrument” (defined by the soundgenerator, a single “player” - iow the midi track controlling the soundgenerator - and a couple of outputs - mono, stereo or surround if you will) or be more than one “logical instrument” where the connection between the “player” and the “outputs” must not get lost is a huge step mentally. I think what you want is what is usually expcted: Have one “controller” (miditrack) controlling one “sound output”.

Havin said all that - as you do already - there are ways to handle all this more or less well. We’ll see how things evolve.