We are using an AT4033 to record vocals via Focusrite into Cubase 10.

However they are really lacking warmth/bass/body (something we are finding difficult to define and not mixing at all well).

But only when singing. When he talks we get loads of body in the track

How do we get more body/warmth in the vocals?

Is that Focusrite dot com?

your recordings will be as good as the weakest link in your chain.
Mic - should be good to go (if it fits best for the voice) try different mic’s (also try dynamics, like sm57 or 58 or a 7)
i name dynamic mic’s because room treatment (or a good sounding room) is also very important when using a condenser mic.
Cabling not to cheap

Mic pre amp is also important. but it is in “Focusrite”

Well, he is singing in a higher register, and from the sound of it he is farther away from the mic when singing compared to when he’s speaking, so I’d just ask the singer to sing closer to the mic.

We are using a Focusrite Scarlett 2i2.
The AT4033 is a great mic into a great audio interface. (We 've also tried a Rode NT1a with similar issues)

I think the singer is about the standard distance to the mic. I don’t think he did change position when singing. The singing and talking were done in same take as a test.

So when we add Reverb, Compressor, EQ it’s like there isn’t the ‘body of sound’ to work with so it sounds a bit thin in the mix as well

It’s like we need a ‘bring some warmth’ VST

He has sung on albums before and sounded great. (Can’t contact the engineer). This is a home studio project.

You can see on the Fallen Angel track we have got to drips with mixing and mastering but we are baffled with the new vocal sound using a MUCH more superior mic.

Then try a different mike, sometimes the cheap mike wins. There can be a huge difference, that’s why many of us have a collection to choose from.
But have you actually tried fattening up the low Mid’s ?
Try to doublicate the track, on the new track eq out anything not needed using high and low pass filters. Add some compression and a fair amount distortion, a mono plate reverb is also useful
Turn the fader all the way down on that effected track,. Now listen to the original and slowly fade it in until you hear it starts to be fat. Then you can adjust distortion and filters for the best result.

Have you got a sample of his voice in the mix of a song? Sounds alright to me on that listen, a difference will be in his posture and proximity to mic when singing vs talking in to the mic.

You can use compression/eq to bring it forwards into the mix - perhaps multi-band compressor to bring those mids out more would help?

Also, check this out:- https://www.youtube.com/watch?v=nGAVTAquscc&list=PLXmwQZcfhFf8YIrhsuOCwXrIpiJ3C4KIj
There’s several parts, but that link should be a playlist of them all.

Nothing wrong with the mic, it’s exactly as strummer said - the register of the singing part is over an octave higher than the talking section. The fundamental of the singing sits around 280 to 300hz, the talking drops to 120 to 150hz. Have a look at these screengrabs:

Singing - note how bright the harmonics are, on some phrases the 8th to 10th order harmonics are nearly as loud as the fundamental, the singer is resonating a lot of stuff in his head and throat to achieve this bright mid-rangey sound. On “ness” and “blow” the 2nd order harmonic actually gets way louder than the fundamental, as can be seen by the bright squiggles at around 500hz. 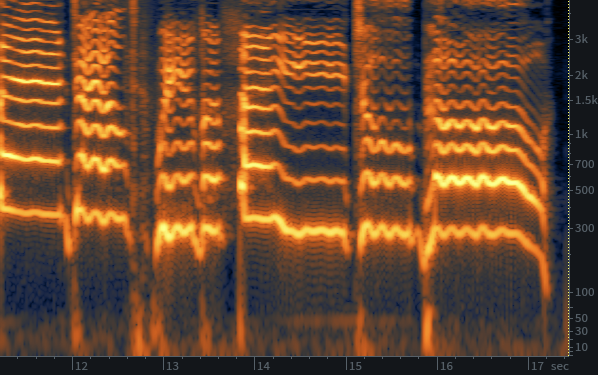 Talking - note that the fundamental, 2nd and 3rd order harmonics are much more dominant, the higher harmonics much fainter as the sound is coming more from his chest. 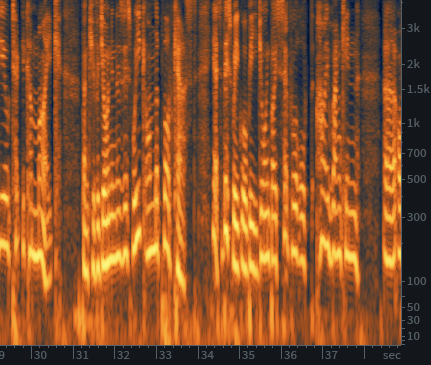 If you want the part to sound fatter, get him to double track it an octave down

You could also try surfereq to boost the fundamental and dip some of the higher order harmonics. Oeksound soothe would tuck in the 2-3k harmonics when they get too hot.

Like the idea of doubling up an octave lower.

And example of a mix with new vocals (needs to be compared with Fallen Angel vocals)
https://soundcloud.com/thrash-metalriffs/2019-song-three-confessions-complete/s-fxIW0

The fallen angel song has lower harmonies thickening it up on a lot of it. When he sings high on his own, it sounds similar to the vocals on the new track - and I can see that the 2nd order harmonics are louder than the fundamental on both new and old for these higher reedy vocals.

I reckon the vocal sounds fine in context anyway, leaves space for the bottom end of the guitars

Surfereq isn’t a magic bullet, I tried it on the new vocal you posted, but it was struggling to track the pitch when the singer hit sections where the 2nd order harmonics got louder than the fundamental (it kept thinking the louder 2nd was the fundamental, boosting it even more). You’d have to sidechain it from midi to get it to track 100% accurately.

If you’ve got ozone, I’d use the dynamic eq to tuck in and control the harmonics when they jump out.

As an aside - the mixes sound cool but, personally, I reckon they’d sound even better if you backed off the ozone maximizer by at least 2db. They’re smashing out at -6 LUFS, mowing off all your drum transients. Listen to eg: the latest avenged sevenfold albums, they’re at -11 to -12 lufs and they sound incredible, the drums are so punchy, wouldn’t surprise me if they mastered it that way to mimic the punchiness of the drums on metallica’s black album (since they copied just about everything else

Change the mic. SM7. This voice needs a dynamic mic, not a condenser, IMO. It’s his head voice that is bright, higher freqs, as the others have said. Those RX picture speak volumes. The plus is the words are very clear - even in the second track which seems quite affected with a slight warble on the voice and a doubling/harmony thing. I think if we heard it unprocessed it would sound very similar to the dry track? Change the mic.

Just one question regarding the first recording: was any kind of dynamic signal processing involved in the recording/playback chain? Specifically a compressor?

Just one question regarding the first recording: was any kind of dynamic signal processing involved in the recording/playback chain? Specifically a compressor?

John records remotely and he swears it was raw. But we did amplify the speaking parts by 600% using wavepad to match the vocals.

But the mixed tracks both use a compressor yes

“Change the mic. SM7. This voice needs a dynamic mic, not a condenser, IMO.”

Wow. The vocalist contacted the studio and spoke with engineer (where he recorded the Synaptik album Justify and Reason where the vocals are amazing - check it out on Spotify - latest album) and he (and others who have analysed his voice) said that John’s voice is not suited to an AT4033 (he has a VERY powerful voice).
He used a Shure SM7b which is much more suitable for a big metal/rock voice like John’s.
So that is what we are going to get

Thanks for all the responses guys.