'Remove unsused media from pool' What exactly is removed?

I can’t see anywhere in this forum or the manual, a definition of ‘unused media’ and am a little paranoid about losing media I may need after emptying to trash then removing from project & disk.

I know many people have lost data when removing media from pool and the most common cause is having files in the project pool imported from other project folders (without ticking the option of ‘copy files to project’) so I’m aware of that situation and take control of that.

However, I’m still a little paranoid about clearing the pool of a large project before completion (intending to avoid large backups etc.) and constantly wonder what the definition of ‘unused media’ is.

For example, if I haven’t finished comping numerous takes, would I lose that option after sending unused media to trash & deleting from disk ie. does that delete the takes that I haven’t chosen on comping.
Also would it remove any ‘track versions’ I haven’t selected - surely it wouldn’t but I don’t want to take that chance.

I know I could make some tests but I expect our guru’s like Martin Jirsak will know the answer in detail to put my mind and rest and maybe others who wonder every time they remove media.

but certainly speed up my workflow by using this remove function without hesitation!

So, if there is a disabled and hidden track which contains audio events, is it considered as used in the project or not?

It’s considered as used!
But to be really confident about it, I would suggest doing some tests by your own. Create a project, record one track, open the pool and see what happens in the different scenarios when you execute "remove unused media"command in the pool,

You can see in the pool which files are used or not. The ones below marked in green are used while the red ones are not used.

I lost important media files using this feature. Partly my fault since the backups I thought I was doing missed these files, but also party Cubase’s fault. What I had done was to create a template from a project, and the template ended up including some clips in its pool. I finally got tired of removing those events so I went to clean up the template. As part of that, I used the remove unused media from pool feature, however, because those clips were unused in template it deleted them, but it didn’t warn me that those same clips were used in other projects and were not trash! By then they’d been completely deleted, not even to moved to my Mac’s Trash. I tried almost everything I could think of to restore them (once I realized my backups were incomplete), but without success. Lesson learned.

Sorry to hear that

I had read about this and before removing from trash, I always look down the right hand column showing file location, if lots of files you can even click on the filename tab to order them so can see easily at top or bottom any files not in the current project folder. If there are some, then that’s another story I think covered in another topic thread, but without a single/simple solution, depending on the circumstances.

Surely this is why we back up projects? Copying the project folder to a different location, making sure that you have archived, (Prepare Archive in Media) to make sure that any file accidently not included in the project folder is copied in, If you have a backed up this project you can execute the remove unused media from the pool in the knowledge that if something goes wrong you can restore your project to how it was before this action.

The Backup Function actually copies the used media only v

In Preferences these settings can reduce/eliminate the possibility that the same Audio File appears in the Pools of multiple Projects. Assuming every Project has its own folder. 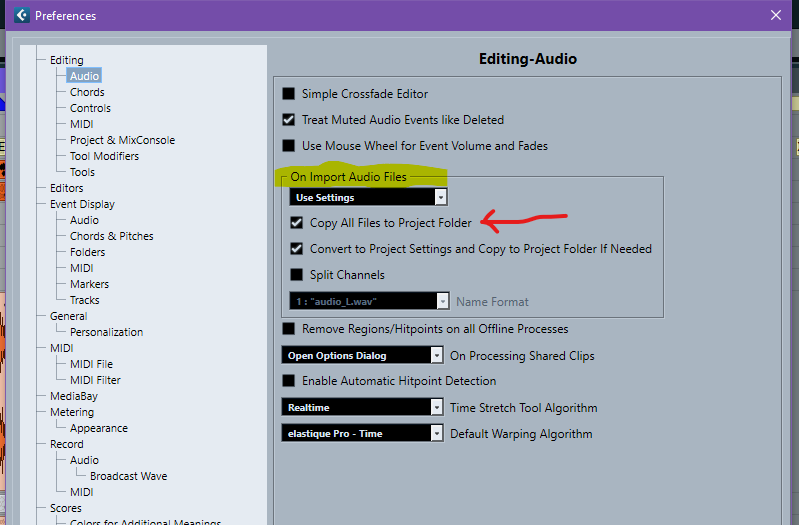 What a great find to avoid such issues

Thanks for spotting that!
I notice the option just a little higher that’s ticked “Treat muted events as deleted” which looks like a precarious option in the opposite direction. I know I’ve used the mute tool on a temporary basis at times whilst deciding what to keep on certain projects and presumably those muted events would be deleted with the ‘remove unused media’ action.

No, this option has a different meaning than you suspect. Have a look in the manual: Editing - Audio

those muted events would be deleted

You could also simply build a macro/PLE to delete all muted events inside the project!

Thanks for pointing that out. I would never have considered it for what it actually is, playing the hidden event of the event on top is muted.

Same thing happened to me.