Currently, entering older music with natural horns results in really messy numbering of the players… for instance, a player might be Horn in C 3, but Horn in Eb 1. It’s be nice if the numbering followed the person and not the horn… so they were always Horn 3 regardless of which transposition.

There’s an option for this, isn’t there? ‘Numbering for similar instruments with differing transpositions’ on the Staff Labels page of Engraving Options.

That actually makes the situation worse!

Yes, it now uses a single sequence, but it’s still numbering each (physical) horn separately. Horn in C 1 is now Horn in C 9.

I’d also add that it doesn’t consider Alto/Tenor/Bass Trombone as the same instrument, and I would very much argue that they should be, as it is universally done in published scores.

Yes, this is a disaster when engraving older music with changing horn transposition. 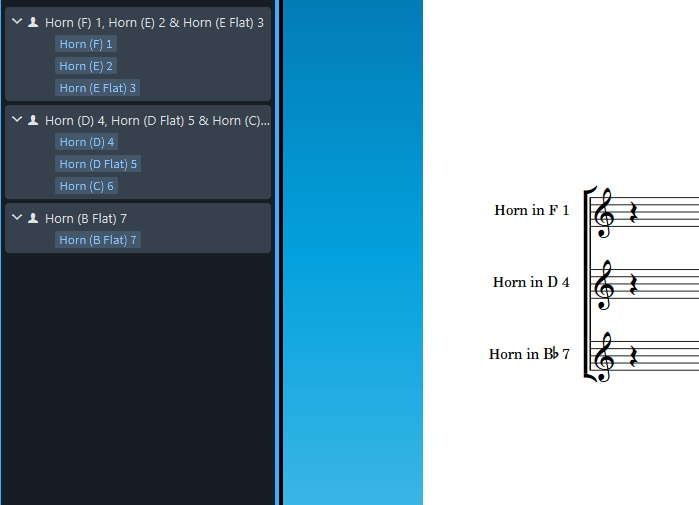 While we’re talking about historical horn parts, it’d be super nice to be able to setup an automatically transposing part, so we could have a modern part for, say, Chromatic Horn in F or C/Bb Trumpet produced in parallel with the historical part with the “native” transpositions.

Ditto for being able to produce a historically accurate bass clarinet in bass clef part along with a modern treble (octave) transposition.

OK, thanks for the feedback. I’ll think about how best we might address this requirement.

Not an easy task. We very much appreciate the attention!

Isn’t this exactly the sort of thing the whole “Player” concept was supposed to solve?

Another NIggle: Cues should reference the player, not the instrument. If I want to add a horn cue to my cello part, I shouldn’t have to care which horn the player is currently playing.

I assume you know that, but just in case. If you include the numerals in renaming players and instruments, you will control the “numerizing”. As shown in this nonsensical picture I whipped up, but inspired by Josh’s example. It is a bit more work, but it does solve the problem in a very solid way.

Thanks so much! I had been theorizing that in my head earlier yesterday but didn’t get around to trying it.

You’re welcome! There are situations where one must use a space before or after the name in order to get rid of numbering (percussion is a good example), and that’s far from ideal. But with horns, it’s pretty easy since you want numbers anyways, so you just have to prescribe them.