Score: how to get rid of transpose text?

This has only started happening since my 7.5 upgrade so I initially figured it was a preference, but I can’t find any setting for this. I’ve got some midi parts that were created in the key editor and start out in F major but after awhile modulates into C major. So then I open it in the score editor it and set the initial key signature to F and then later change the signature to C. It makes those changes like i’d expect but now it also adds some text saying “transpose 0” (see attached) which I don’t really want. But if I delete the text, it also gets rid of the actual key change leaving everything in F. Previously it would just insert the new key signature but not add any text. How can I make this text go away, or even better never appear in the first place? 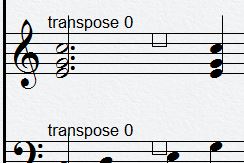 Can’t you hide it?

(I can’t really help at the moment… I’m pretty sure I’ve seen that myself, but I cannot remember in what circumstances… anyways, it was before Cubase 7.5).
I’ve just tried a mock-up of what you describe (including having bar handles visible etc.), and I don’t get that text here.

Yeah, what he said.

I was thinking it might have to do with the root key and transpose functions. I played around for a few minutes but couldn’t make it happen.

Did you actually use any transpose function in the project?

Can’t you hide it?

Did you actually use any transpose function in the project?

I think I did early on to a midi part in the project window to see if I wanted to change the key, but then I deleted it and changed the actual notes. Perhaps Cubase remembered?

I just spent some time taking a midi part and duplicating it and then setting the transpose on the copy in using the status line in the project window. Could never get the text to appear. So I guess outa sight outa mind.