Is it possible to change the Staff Visibility for just a particular Flow? I’m not seeing any way - but maybe I’m overlooking something… Thanks.

You can set Manual Staff Visibility at any System Break or Frame Break. Double click the Signpost to set it.

Hi Craig_F - Thanks for response. I already tried that - it’s really kludgy - but beyond that I can’t figure out how to get rid of the system dividers - so it looks really ugly (at least to my eyes). I’m not seeing a way to remove / hide the system dividers. 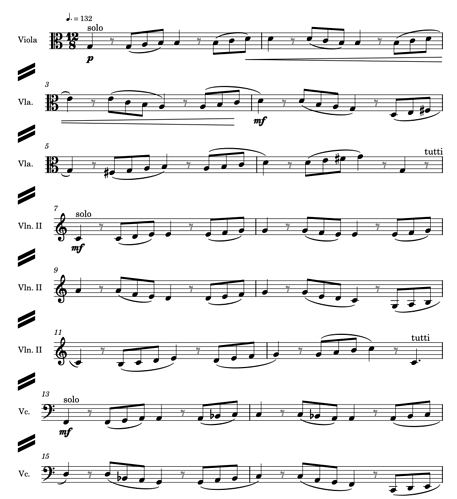 System dividers are set on a layout basis in Layout options >Staves and systems >System dividers. You can disable them there (or change the settings that determine whether Dorico should show a system divider)

Such is often the case with workarounds. Not sure what to recommend. For the Score, if you just want one player active at any time, you could add another Player that holds all the instruments and use instrument changes. But that would muck up your parts.

@MarcLarcher He only wants to disable them for a single Flow.

Can he uncheck that flow for the unwanted player?

What would be really nice would be to hear what @eheilner wants to do or see on the page rather than merely asking about a technique. What players are in the score? Which player needs to be missing in one flow?

It’s very difficult to answer these questions definitively without knowing what the rest of the layout looks like. Why are you using manual staff visibility to hide staves? Why are system dividers used elsewhere? Is the number of players or staves changing, and if so why can’t you use the functionality provided at Layout Options > Staves and Systems > System Dividers to bend Dorico into giving you the system dividers where you want them?

(edit: ah. Derrek had similar thoughts at the same moment.)

This is a multi-movement piece for string orchestra & bass guitar (so 6 staves altogether). In between each of the movements there’s a little “intermezzo” (for want of a better word) in which solo players from each section takes turns (so only one instrument at a time). Each of the movements is a flow and each of the intermezzos is also a separate flow.

Since only one player is active at a time in the intermezzos, I’d like to hide empty staves - but Dorico does not currently allow hiding staves on a flow basis - and I find that distracting in the movements.

Alternatively - as shown in the little picture above - I can manually hide the un-used staves - but you still have the system dividers - which also cannot be implemented on a flow basis.

BTW - this is not a major impediment - it’s a minor annoyance in the larger scheme of things.

There are 3 ways to omit staves. For this you want the first one:

This is a case of thinking of “staves” rather than “players” leading you down the wrong path.

[Edit: Some of my hasty descriptions above corrected after Lillie’s reply]

Allow empty staves to be hidden per system (setting per flow)

This setting is actually per-layout, as it’s in Layout Options. (Hiding/Showing empty staves)

Although you set manual staff visibility from selected system/frame break signposts, this changes the visibility of staves from the selected point onwards until the end of the flow, not just for a single system. It’s important to be aware of this, because manual staff visibility doesn’t only hide empty staves, so if a staff that was empty where you manually hid it later has music but you don’t reset its visibility, it will remain hidden. (Hiding/Showing staves from system/frame breaks)

Here is a sample file. You can examine what has been done in Setup Mode to produce the results along the lines of what I think you are seeking.
proofOfConcept.dorico (521.6 KB)

Thanks for the suggestions - but none of these work for my particular situation. Manual staff visibility comes the closest, but you still have the annoying system breaks - which should be unnecessary since only one player at a time is playing. You cannot hide these since even tho only one player is playing at a time, Dorico still considers the other players to be present.

In your file, please tell me which player(s) you want to see in each flow. Then the solution is simple.

I appreciate the time you’re putting into this, but this solution does not do what I’m asking for. To answer your question, every player is playing in every flow. I don’t want to use Hide Empty Staves since it makes the piece difficult to follow for two reasons:
proofOfConceptRevised2.dorico (698.3 KB)

Firstly (and most critically), if you look at the attached, I took your revised file and removed one instrument from each system in the first flow… I can’t speak for anyone else, but I would find this difficult to follow. Of course this is an artificial example but the same principal would apply to my piece. If you have 6 players and in scattered systems throughout a large score a player is omitted (and different players in different places), this is not obvious what’s going on.

Secondly, in flows 2 and 4 (where only one player is playing at a time) we have unnecessary system dividers.

Just to repeat my previous comment, this is not a major impediment - I was just hoping that there was something obvious I was missing.

The simple fact is that I have no idea what you are looking for. I tried to reproduce your illustration at the top of the thread, and I removed the dividers. You have apparently put them all back in and restored all the staves you showed as absent in your illustration.

I wish you the best of luck getting what you want.

I’m frustrated as well that I could not explain my need.

I really do not understand why the global layout options>vertical spacing>staff visibility>hide empty systems> all staves combined with keep abbreviated staff labels is insufficient.

You can increase the level of control by judicious placement of system breaks and manual staff visibility.

It is a curious requirement (and runs the risk of hiding notes that ought to show). But it is possible.

Same problem with show system dividers - it applies for the whole piece - and I only want to disable them for these certain flows.

If I understand this correctly, you do want to show system dividers in movements 1, 3, and 5, where 6 players are present, but don’t want them to show in movements 2 and 4, where only 1 player is present?

You can change the circumstances in which system dividers are shown, including specifying the minimum number of players required to show them, in each layout independently. For example, if you only want to show system dividers between systems that...

I think the option “When minimum number of players present.” should do the trick: When set to e.g. 2 the system dividers should not show on flows 2 and 4, because there’s only 1 player.