Hi, I’m using the German Version of Dorico 4. In Setup Mode, the List of Instruments shows me a bunch of duplicates, like 3 Kontrabässe, 2 Bassgamben, 2 Tenortrompeten and many more. Is there a way to get rid of these duplicates? Also the Classical Guitar, which I use a lot, is not translated, but I would like to have it as “Klassische Gitarre” oder" Konzertgitarre". Is it possible to edit the list?
Thanks for your help.

But this will change the name of the instrument in the score but not in the list, doesn’t it? 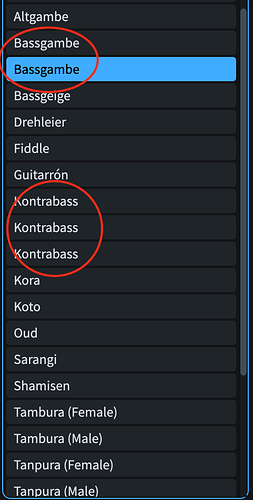 And what about the duplicates?

The duplicates exist because in English some of these instruments are known by different names, but in German they’re known just by a single name, so those instruments appear in the list multiple times with the same name in German (and in some other languages).