New user. 1st post. My piano teacher has a method of indicating fingerings on piano scores where he just draws a faint vertical line on either side of a group of notes to differentiate one handful of notes from another handful. This is useful for quickly visualizing hand positions, particularly when they become unusual in music like Barber or Stravinsky or in Ravel where you’re dealing with repeating notes while your hands are overlapping. I was wondering whether something like this is possible in Dorico.

First, Terrence, welcome to the forum.
Could you post a small image illustrating what this would look like?

(I realize that as someone who joined the forum recently your posting privileges might be limited until you read more messages. I am hoping that your previous post viewing may have put you over that hump.)

if you’re preparing a piano score, something you’d like others to read, I’d avoid using this type of casual notation. it’s most definitely not standard. 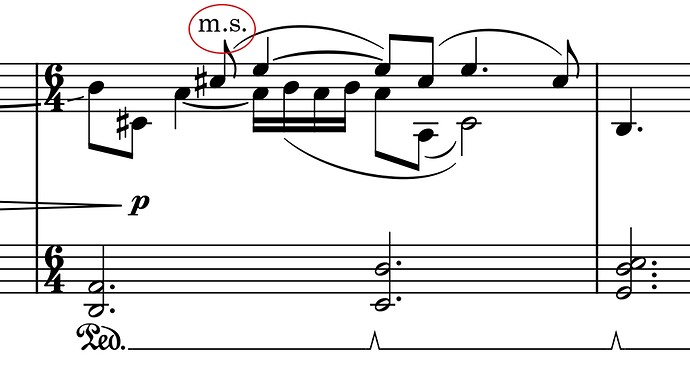 (that 2nd example isn’t actually the best I could do… I’m still trying to decide how exactly I will approach that passage to make it clearer and more “standard”.)

Michel, I agree with you on the presentation of a published score but wondered whether Terrence was thinking of a teaching score for “emerging” piano students. I’d still like to see an image of what he was after.

Only Terrence could say how he intends to use this capability.

f you’re preparing a piano score, something you’d like others to read, I’d avoid using this type of casual notation. it’s most definitely not standard.

if you want to mark off the beginning of a passage that is played by the other hand, either use the abbreviatio

Thanks, as it turns out I am familiar with both of these standard notational devices. What I am not familiar with is the names Dorico uses to refer to these so I can look them up in the online help.

So, this section of my score. It’s essentially outlining three minor chords in an percussive, angular way. The tempo is, well, healthy with a quarter note = 138, so you’re playing about 9 notes a second when playing 16th notes, which I’ll be doing in this case in a 10 second burst.

Please refer to the following screen shot image. Thanks again in advance for the advice and guidance. 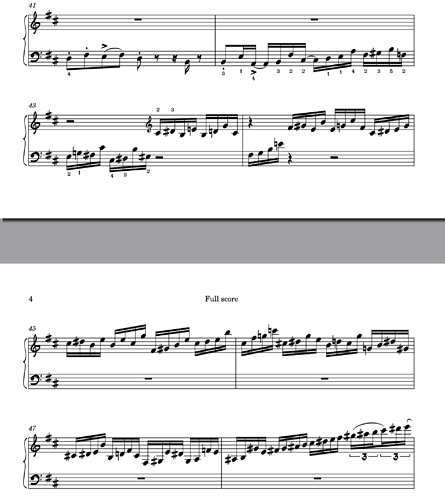 If that approach seems to create too much jumping between staves to be easily read, another way is using 2 voices, which gives you up- and down-stems. This way you’ll have lots of extra rests you can hide.

Right on. The last approach you suggested mirrors the suggestion my piano teacher made. Then he paused, got a full lung of air, and emphatically told me to “get off that darned computer and onto the piano”.

I’d like to follow up on the vertical line with hook method. I’d like to look up how to make use of those. Is this something that requires you to be in Engrave Mode?

no, no.
I just selected the vertical line with a single hook, and then in the bottom panel, adjusted whichever end I needed to lengthen, or if I had to “reverse” the direction for the hook to be in the right direction.

Select the note(s), then with the line tool, select the vertical line with a hook that you will use.
If the non-hooked end of the line does not protrude enough, then adjust it with the bottom panel option for that. or if the hook is in the wrong direction, then reverse it.

It takes a few trials to figure out which switches to trigger, but it’s really simple once you’ve figured it out.

For something like this, sometimes it’s better to leave it unmarked and allow the performer to decide how s/he wants to do it. Few things are more annoying than having a score cluttered with markings you wish to ignore and cannot erase.

IIRC Terrence said the sole user of the music would be himself. My earlier thinking that this was for his students was incorrect.