hello i am using the meter on master and supervision to check integrated and peak values
Why they are not the same? Expecially The Mter/Loudness in the main windows seems not so accurate…during plaback seems ok, but for example if i use analyzer function this tell me that peaks are there 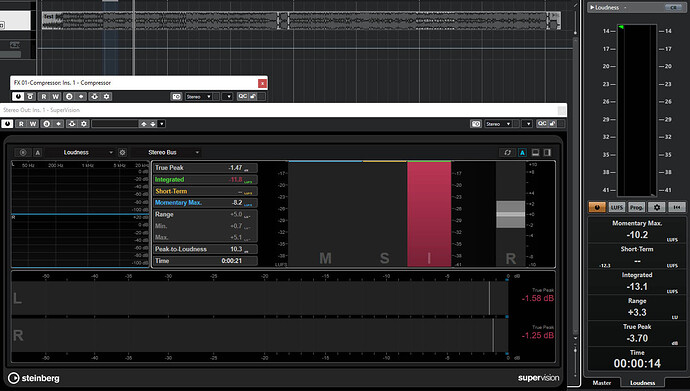 Looks like you measured only a part of that. Is it the same discrepancy if you measure all of it? Also, what does “statistics” say about the file loudness?

i think statistics is the analysys of the audio file before all mastering…
what you mean i measured only a part? i played from beginning the whole track…

Ok, I didn’t know there was mastering involved. If so, of course make sure that the plugin is instantiated after all of that, which I’m sure you’ve done (also that the master fader is at unity).

what you mean i measured only a part? i played from beginning the whole track…

Well I didn’t know that either. It looks when looking at the picture as if the playback has lasted 00:14, 14 seconds. I would imagine that there could be some difference if the audio takes slightly different paths to get to the respective meters. I’ve seen in my projects several meters react every so slightly one after another. Once playback of all is done then the measurement is pretty much exactly the same.

The only other thing to check is that you’ve set both the same, assuming you have different options (I don’t use the meter in the right hand section, only the plugin). Different gating for example should lead to different measurements… though certainly True Peak should be the same.

in spectral vision i cannot set integrate luf at 12…as minimum is 13, as i di in the other part.i don’t think this is the difference though

what you mean i measured only a part? i p

ok…i know what you mean, but i think the real problem was another, on the master strip channel, supervision was before limiter…

by the way, is there a way i can have these values without the need to listen the whole track?
reaper has offline analysis…is there something similar?

The loudness track can operate faster than realtime I believe. I don’t use it, but check it out.

i have tried but it seems that i still need t oplay the whole track
or do i do something wrong?

Enables the creation of a loudness curve for a defined section in off-line processing.

ahh i undesrtand, yesterday i tried to use it but i could not click on quick analysys…now i understand, it was because track was playing…need to click when not playing

Make sure you have in/out loop points set as well. It measures the loudness within the loop range.

in out set at beginning and end of the track?