these two images are the same measure: 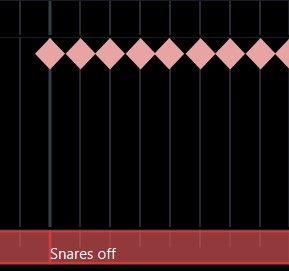 Check that both techniques are in the same mutual exclusion group…

In the Edit percussion settings window, you can choose whether a particular version of a notehead-triggered sound adds or replaces another version… I’ve found it could be a source of problems in my perc map and found that if I always use « replace » with a proper description of the playing techniques involved, it would work properly — AFAIK there’s no mutual exclusion groups in percussion maps. So snares on and snares off should be set as « replace » in order to avoid a confusing situation where snares off playback technique is added to snares on (or the opposite). I’m not quite sure I really know what it’s all about, but I’ll eventually find out! (or someone who knows will chime in)