I’ve been using the “starts voice” and “ends voice” functions to hide rests when the number of voices in a bar changes. But I’m running into some cases where it doesn’t work. Here’s an example where it’s not working for either staff: 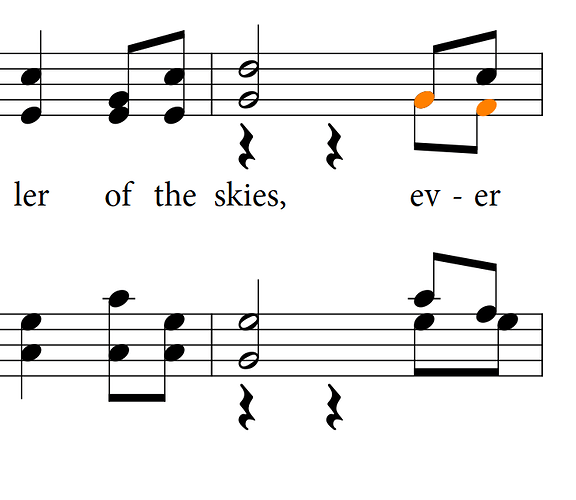 Has anyone else run into this? Doesn’t seem to behave predictably for me.

I guess this isn’t really an answer to your question, but why aren’t all the lower notes in a downstem voice? If they were you wouldn’t have that problem.

It’s common in SA-TB (condensed score) choral music to combine voices when the rhythm is identical, and when the interval is greater than a 2nd.

But if the rhythm is independent, or if the distance between the voices is a unison or second, the voices are displayed independently.

So I do a lot of moving back and forth between one voice in a bar and 2 voices in a bar.

Well, that wasn’t the question
Have you used the downstem voice earlier in the pice? In that case _Ends voic_e in the properties and then Starts voice will solve it.

I’ve had the same problem myself and I don’t know how to solve otherwise.

I take it highlighting the measure and using Edit > Remove Rests doesn’t work either?

Mats: that’s it. I had to find the last time I used that voice (even if it was 4 bars previous) and select “end voice,” before I could “start voice” for the later one.

But “Remove rests” is better, I see. Thank you!

aaaaand I made Ctrl+Shift+R a shortcut for “Hide Rests,” and I’m having a praise break over here. Awesome.

When I tried to do it with your example, without having any downstem voice earlier I couldn’t hide the rest in any other way the color them white.

Anyone else that can tell us how to do that?

Select the whole measure, and Edit–Hide Rests. Worked for me!

I cannot believe months after Edit>hide rests has been implemented, this kind of problem still rises… There have been loads of liters of virtual ink spilled over that topic before 1.1 (I think that was when hide rests appeared)
Hopefully, the improved manual with a nice index updated by Lillie today will put an end to this!

Gaah, I’m sorry for continuing spilling ink, Marc. By some strange reason I always forget checking the top menu, since most of the times the goodies are served in the properties. But I promise, I’ll try to get better.

It’s an honest mistake. I plunged into all the tutorials and information I could find, and I feel like the top menus were really under represented in the documentation previously.

FWIW, I believe the Remove Rests command works by automatically setting the Start/End voice property for surrounding notes, so you were both very close!

I guess some of the videos will be updated in order to let know the new Doricians that you no longer have to struggle and find the right notes to start/end voices!

Hello, excuse me for jumping in; for clarification (as I am not in front of computer): is it “Hide Rests” or “Remove Rests”?
I remember using the “Remove Rests” (as a simple replacement for the more complex “End Voice”…“Start Voice”)
Does an independent ”Hide Rests“ exist in Dorico?

You’re absolutely right, k_b. Remove rests does the start/end voice job for you. There is no “hide rest” function — I remember Daniel being reluctant (for very good reasons) at hiding stuff instead of implementing clever ways to achieve a similar result that makes sense.