Dorico’s spacing seems to behave differently depending on the reference value set. Basically, in the following example, it behaves correctly with default spacing, but neglects to give extra space before the second 16th note at a looser spacing. 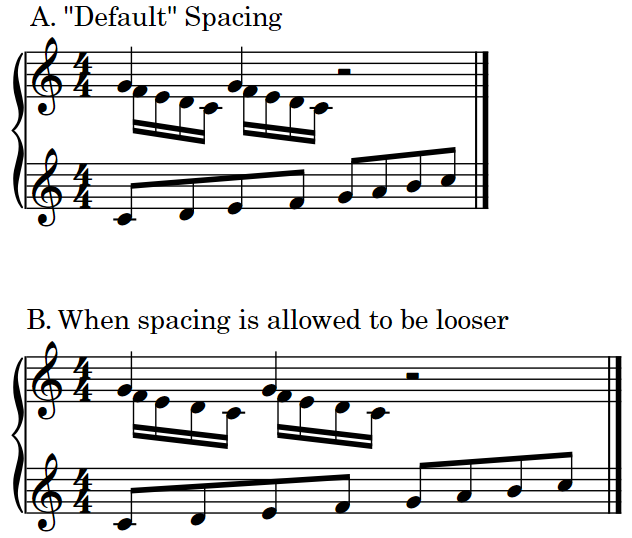 I can’t reproduce this problem, Knut. In the attached project I have the Full Score layout set to the default note spacing value of 4 spaces for a quarter note, and in the Piano layout I have it set to 8 spaces, and both layouts exhibit the appropriate adjustment in the case of the shorter note being offset to the right.
spacing-test.dorico.zip (197 KB)

Thanks for looking into this, Daniel!

I tried it again with only a single bar, and it worked fine. However, adding three empty bars to fill out the entire system, and then increasing the reference width to 4 1/2 spaces, the problem became quite apparent. At 5 spaces, the effect is less apparent, and at 6 spaces the notes are spaced correctly.

Hello Daniel,
I tried your example also , and it seems that 4, 6, and 8 spaces work as you say, but many values between (most?) give what Knut sees e.g. at 4.5 spaces.

Andrew (the developer responsible for note spacing) and I had a look at this together today, but it’s not immediately obvious what is going on, so we’ve logged this for investigation as soon as we have some time.