I have lost confidence in this program

Why should I have to fiddle around with my system which works for pretty much everything else I throw at it for the sake of this one program? It’s not acceptable and in my opinion should come with a health warning!

Again, a software by itself can’t cause such instability: modern OS (such as Windows 10) have all sort of sandboxing to prevent this.
The only low-level components that can cause this behavior are either device drivers, or hardware failure.
In every report here, it happens when all your CPU cores are used simultaneously to the max of their capacity (unmixing process). So it’s not unreasonable to suspect a failure from the CPU, or overheating, or some low level management related to it. Even when a DAW is under heavy load, it rarely use all cores to their max capacity (including all available SIMD instructions) continuously.

Have you tried raising the CPU voltage has suggested here ? It fixed the issue for this user.

I have lost confidence in this program

Why should I have to fiddle around with my system which works for pretty much everything else I throw at it for the sake of this one program? It’s not acceptable and in my opinion should come with a health warning!

To the last poster, OK so tell me what changes I need to make to my system in order to run it without random reboots which will likely eventually knacker my hard drives? Or are we all paying guinea pigs?

To the last poster, OK so tell me what changes I need to make to my system in order to run it without random reboots which will likely eventually knacker my hard drives? Or are we all paying guinea pigs?

Did you change anything in your BIOS? are you overclocked? hyperthreading on or off? which type of graphics card? Did you calculate power consumption correct for the powersupply? are the cooling fans spinning? have you done a RAM check, could be bad ram - might have to take your ram out and put back in one at a time (with computer off obviously).

could be a lot of things. but, thinking about SL being graphics intensive -im wondering if your graphics card starts to suck more power than usual and your PSU isn’t keeping up.

Look for an option for “CPU core ratio”.

Mine, by default, was set to “per core”. I switched to to “Auto” and BOOM it fixed the issue.

Something about how the core’s resources are allocated is causing the reboot in my case.

Here is a Dropbox link to a video I took from my phone of exactly what I did.

Issue here seems to be what is being called “CPU under voltage” in so far as if I overvolt the cpu from default settings I can survive unmix stems.

I should not have to do this with anything let alone a basically non real time process.

RX8 never causes such a problem with the same / similar operation on this machine even though the same amount of time is taken to process.

I wonder if the usual recommended audio machine bios settings set by Steinberg are not the best ones to use with this program?

There is really no need to hammer any machine with a non real time process IMO.

Do your problems happen on short, say 1 bar events, as well as long/entire song?

So SL7 is 3.4 times faster performing the unmixing. It’s likely consuming more CPU power than RX8 during that process.

This is confirmed by the CPU usage graph during the unmixing:
RX8: 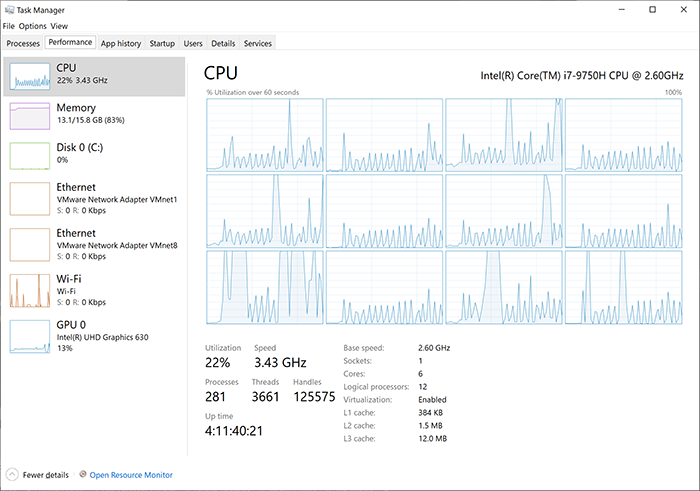 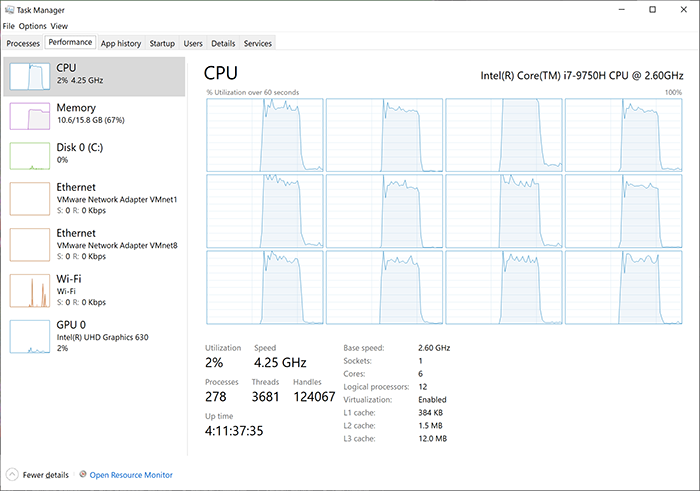 I agree you should not have to tweak your BIOS settings, but in that case it’s purely due to hardware settings not being set to be stable under heavy CPU load. Fortunately the BIOS settings let you fix it.

Ok
Thanks for taking the trouble
No sale here even at half price
Others may disagree.

Ok
Thanks for taking the trouble
No sale here even at half price
Others may disagree.

in your position I would actually do the opposite, and use SL7 as a benchmark to fix my system so that it doesn’t crash - because who knows, maybe you will run into this problem with other software, or on a project, or in a more intense RX8 CPU processing situation.

I haven’t had problems unmixing and i’m on Windows 7, Cubase 10… then again, I’ve only been using it on short events.

I recently installed the demo version of SpectraLayers 7 and find it extremely capable.

However it runs very unstable on my PC.

In my case SpectraLayers 7 crashes with BSOD in many unpredictable ways. I have not succeeded in running it longer than an hour. 15 minutes is typical. Several tools like healing or unmixing produce crash. After the crash I reset SpactraLayers. After that I am able to use the tool that crashed many times in succession, but after a while it crashes again, even if I just repeated what I previously did.

My computer is a high end workstation and is not overclocked. My bios CPU (and other) settings are set to normal. I routinely use parallel programs like Davinci Resolve Studio and Blender, and often render an image for several consecutive days, using all processors. I have never had any crash problems.

I would very much like to acquire SpectraLayers, especially now for the bargain price, but it is almost unusable for me as it is. Please convince me that there will be a fix, or work around.

For several years, Prime95 ( https://www.mersenne.org/download/ ) has been the gold standard for CPU stress testing. Any serious DAW manufacturer checks if Prime95 runs a few hours without interruption to ensure that the PCs are stable and capable. There’s 100% load on all cores with it. I already posted a screenshot in the other thread that my build is absolutely stable with it.

I do respect all your efforts to optimize your software for giving the fastest possible results. But I suggest that you publish a benchmark build for anyone to check their computers before buying it, and also for DAW builders to give them the possibility to guarantee stability with SL at this level. Seems to me as if your software is the hardest job a DAW build can do ATM.

As I reported, I had serious instability problems with SpectraLayers Pro 7 (demo).

However I now discovered that adjusting BIOS settings indeed seems to cure the problem, as described in sleepylions recent post about ASUS motherboard BIOS. I have ASUS too.

After changing Advanced Settings / AI Tweaker / CPU Core Ratio from Per Core to Auto, I have now played with SpectraLayers 7 for several hours, and have had zero crashes. Definitely much better than before, and hopefully the fix for good. So, I purchased the license.

The trouble is that the best settings for stable low latency audio are not the same as needed for SL7 in my case.

As to it being faster than others , who cares , its an offline process.

I care a lot about the near RT performance of this machine when I need it for work a day DAW use.

My machine also passes all the usual recommended stress tests

Changing the way the CPU Voltage is handled in the BIOS won’t affect in any way the audio latency, they are unrelated (and there are no audio settings at all in the BIOS anyway). It can only benefit the stability of your system overall without affecting its performances.

Setting the BIOS settings to AUTO made no difference here as they were already set to AUTO! SL7 is still rebooting itself when I unmix stems and often at the beginning of the unmix process so I fail to see how this system can even get a chance to overheat!

It doesn’t seem to be an overheating problem but something more related to power requirements (CPU not getting enough power when all cores are used simultaneously to the max of their capacity).

I’ve just increased my CPU Voltage to 1.3 and that seems to have stabilised things

Great, glad to hear that!