This is the Dover score from 1989, a reproduction of the Muzyka edition from 1965. So I’m guessing it’s either 1913, or maybe '29; pretty sure it’s not '48, and I did not know about the corrected version, that is interesting! I found very few mistakes in the Dover version, which I marked in red in the Dorico score.

I’ve also fixed lots of irritating mistakes I made in Part One, so it’s now updated at the Google Drive link if people are interested. Below are a few questions that I still can’t figure out about Part One; but in the spirit of Leo’s recent post praising Dorico’s cueing, I want to say that Dorico is really awesome, and I can’t imagine trying something like this in another program. Time to get that Dorico T-shirt!

4 after 28 - condensed bassoon trill auxiliary notes are the wrong pitch, although they are correct in Galley view

4 after 65 - tubas and tenor tubas, can’t amalgamate slurs if the instruments are condensed into stems up/down (maybe this is on purpose?)

Thank you so much for sharing this! An absolutely stunning artwork!

I found very few mistakes in the Dover version, which I marked in red in the Dorico score.

Clint Nieweg claims to have found 20,000 (twenty thousand) errors and anomalies in the various editions. Also, a set of parts that match the Muzyka score does not exist.

In 2018 Nieweg found additional errors, but this version is not yet available.

This shows how efficient the Dorico file format is; zipping only saves 2%!

This is because the Dorico file is a zip already, or some other compressed format. I know that because when I accidentally open up a Dorico file using 7-zip, it shows the files and folders inside the “zipped” Dorico file.

Clint Nieweg claims to have found 20,000 (twenty thousand) errors and anomalies in the various editions. Also, a set of parts that match the Muzyka score does not exist.

That is amazing, I will have to check out his score, thank you! For what it’s worth, the mistake that jumps out to me the most is the oboe downbeat in the Introduction, one bar before rehearsal 6. Every recording I’ve heard has E natural, while the score has E#.

Every recording I’ve heard has E natural, while the score has E#.

Ah yes - that one is correct in the Dover score, but wrong in mine - now fixed, thanks.

I would not take the Dover score as the epitome of accuracy. Editions reproduced by Dover are usually chosen because they are in the public domain, rather than for any musicological accuracy. The items involving the oboe discussed above are correct in the B&H fs that I have, even though the B&H Stravinsky scores are not generally noted for their accuracy! Perhaps the B&H study score (“re-engraved edition 1967”) is generally better. It agrees with my fs in respect of the oboe.

Does anyone have a reference to Clint Nieweg’s findings? Were they published somewhere?

Does anyone have a reference to Clint Nieweg’s findings? Were they published somewhere?

Published by Kalmus in 2000, apparently.

I suspect there are earlier reprints by Kalmus, so make sure you get the edition you want!

The Nieweg edition is now published by Serenissima.

Great, thanks Steven! An influential piece for me I studied when I was young, great opportunity to study it again and learn more about scoring with Dorico.

Looks like you used the stock condensing feature without any tweaks in settings - did it ‘just work’? If so amazing feature.

I did lots of condensing tweaks, but some of them were probably unnecessary - I was learning while doing! Many times I would do manual condensing, and then also check the box for “Inactive players: Do not condense”. That is an excellent way to hide bassoon IV, if only three bassoons are playing.

I selected that option in Notation Options, but sometimes it seemed to work better if I also checked it within the Condensing Change box. Maybe that was me being superstitious.

I went to open this today in the new Dorico 4, and curiously (for the first movement at least), the 1st bassoon part notation (and playback) disappears completely in the 4th bar??

Here is a screenshot of them side by side

And just for reference, the exact version info: 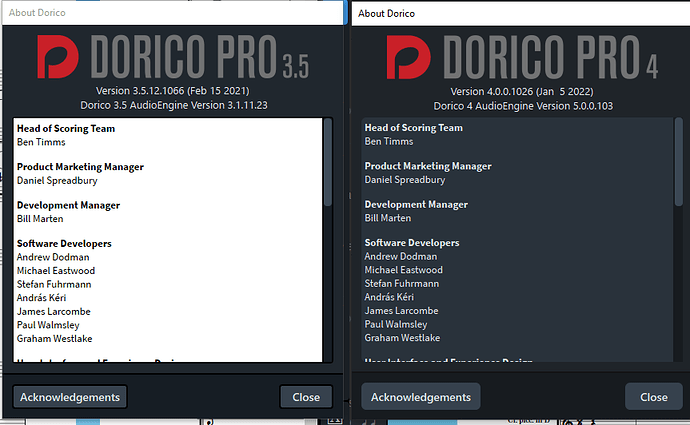 Thanks! I tried it just now and the same happens for me, both in galley view and condensed. There are tuplet rests for the Bassoon 1 part, but all the notes have disappeared, only for the first flow as far as I can tell.

I’m also noticing some problems with vertical spacing in some of the other movements here as well, and some weird balances in playback. It’s entirely possible that I had some screwy things in the file - tons of manual vertical spacing adjustments, bracketing, etc., to try and match the published version.

Weirdly, just today I had Part Two open, and it seems to work fine in Dorico 4: spacing all looks the same as far as I can tell, and playback sounds decent - the trumpets seem a little softer maybe than in 3.5. Hmmmm! I did input Part Two after finishing Part One, and maybe my Dorico chops improved in the meantime, although it still has lots of manual adjustments for vertical spacing, brackets, etc. I’ll try to fix Part One, and see if it works in both Dorico 4 and 3.5.

I get the same result on my system too. That’s a pretty serious proofreading concern if D4 doesn’t retain all the notes from a D3.5 file!!! Casting off changes as well. Not unexpected I guess if notes are missing. The 2nd system of page 2 starts with bar 16 in D3.5 but bar 17 in D4. Obviously everything else beyond that is changed too. Yikes!

I was assuming that I had maybe done something wrong, but if the notes themselves no longer seem to exist, I would wager that isn’t something you could have caused…hopefully this is a bug that can be fixed somehow. The vertical spacing issues you mentioned may certainly be related to the 1st bassoon part basically vanishing from the score, so no wonder things would be screwed up, especially in the less dense sections. I’d hate to lose any music in that fashion (especially something as incredibly complex as this!)

On another note, great work again by the way! I’m studying this piece privately with my professor so this will no doubt be an INCREDIBLE resource to utilize when breaking down everything that’s going on. Trying to play back divisi by themselves are causing some issues right now in galley view, but that may be just a 3.5 issue in the meantime.

This is unfortunately a bug, see here: Dorico 4 missing notes when importing a project from Dorico 3.5

This is the sort of work that could go on the Scorico site about to come into existence.

My wish would be that MusicXML would mature to the point that this would become an acceptable file format for IMSLP and other similar sites. But robust interoperability works against the goal of protecting intellectual property. That will be a big barrier.