Hi folks. I’m not technically strong, in fact I’m in need of kindergarten step by step advice. From browsing this forum I can see that this is an introductory level question from someone who has used Cubase 4 simply to import audio tracks from a CD exported by a 16 track recorder. I’ve been doing that very happily for 3 years, but a few weeks back I became the proud owner of a Yamaha PSR-S650. This keyboard can save ‘songs’, ie midi files, and also export them to USB sticks. I’ve also downloaded the USB-MIDI drivers whilst the keyboard was connected to the pc with a USB A-B cable. Now what I want to do in Cubase is play and hear the song I had created on the keyboard, add some audio, and remix the entire set of tracks. Using the files from the USB stick I have imported midi tracks, but when I play I hear nothing. I’ve read the manual, I’ve looked at tutorials, I’ve read forums, but none of them are interactive!!! In Cubase I’ve looked at VST instruments, and that’s greyed out. I found a menu for installing a device, but my particular Yamaha keyboard was not listed (I saw one suggestion to use ‘GM’ assuming this meant generic, but that hasn’t helped). I also suspect I’m flaying around in both VST and Midi when there are differences I don’t appreciate. And a bus is something I take to the airport. If anyone is prepared to offer some easy to follow advice I would be very grateful. Thank you.

Are you using a dedicated soundcard/interface or just your computer’s built in audio?

If you have an interface you should be able to just record the output of your keyboard to an audio track in Cubase. That’s assuming you want to hear the sounds produced by your keyboard.

If you want to use just the imported MIDI files from the keyboard you will need to assign them to a VSTi in Cubase to produce sound (MIDI is only information, no sound).

If you want to use your keyboard to record in real time directly to a MIDI track you should be able to use the USB-MIDI connection. Have your keyboard powered up and connected before launching Cubase and the MIDI ports should be detected. Again, you will need to assign the track’s output to a VSTi to produce sound.

Now what I want to do in Cubase is play and hear the song I had created on the keyboard, add some audio, and remix the entire set of tracks. Using the files from the USB stick I have imported midi tracks, but when I play I hear nothing…And a bus is something I take to the airport.

Very grateful to Scab Pickens and Bane for responding. I’m attaching a couple of images that might shed more light. 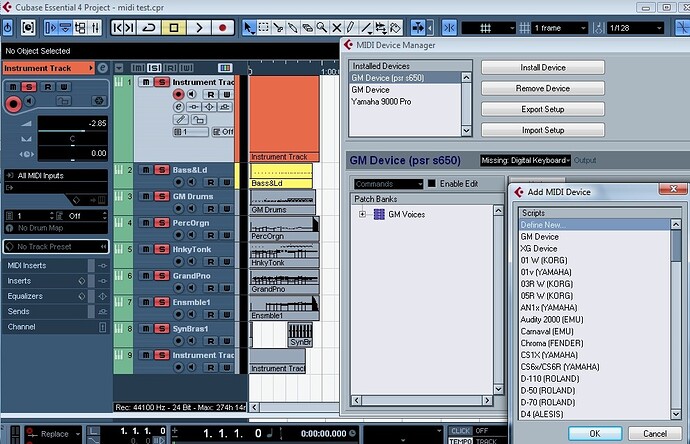 cubase4.jpg991×639 163 KB
As far as I can see, if step 1 is successfully import midi file, I can do this. So I still have to assign instruments and sort out inputs and outputs. The images show the greyed out VS instrument selection and also the dropdown list of devices which can be installed - this list does not include the PSR-S650 keyboard - as you’ll see I tried a couple of others, but Cubase doesn’t recognise a connection, even though the keyboard was linked via a USB A-B cable at the time. 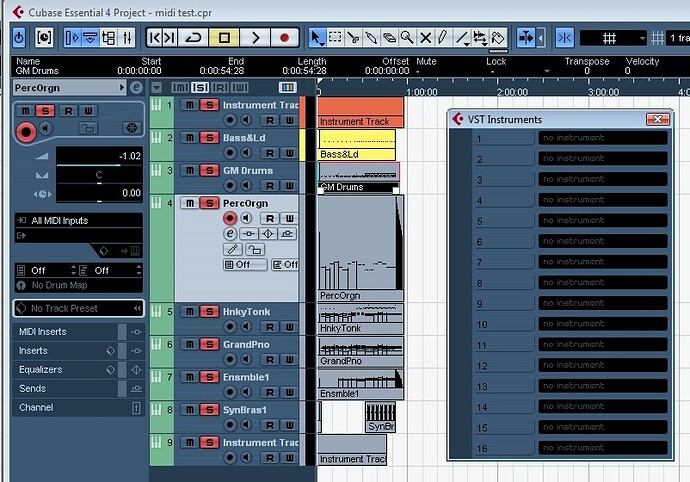 cubase5.jpg802×561 127 KB
Just to restate what I want to do. I want to hear the midi tracks, and I want to add some conventional audio tracks as well (I’ve done audio inputs dozens of times, so I’m fine with that part), then remix the whole blend. I do NOT want to import the keyboard song as audio because they can contain up to 16 tracks and I’d like to be able adjust each track individually rather than just as one audio input.

The reason why you aren’t getting sound is you haven’t routed the output routing, you need to left click and select one of your instruments from the drop down. 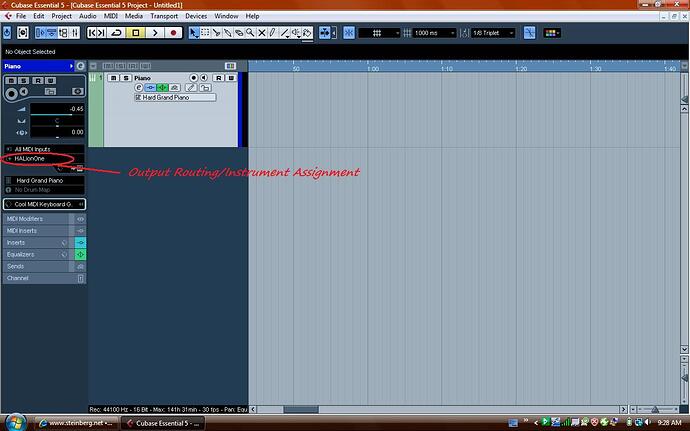