Suffix in hairpin positioned as a prefix? (Bug?)

Contrary to immediate dynamics, putting a suffix in hairpins (crescendo or decrescendo) is exactly the same as putting a prefix. (Also, putting both a suffix and a prefix, they get positioned both at the beginning of the hairpin.) 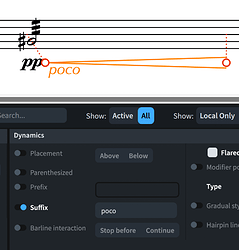 Is this normal? How do I get the “poco” suffix at the end of the hairpin?

I don’t think you can (there would also be a real risk that for a crescendo spanning say 4 bars, the performer would only read the direction “poco” after already getting quite loud) but you can position the modifier in the middle of the hairpin – I think that’s the “Modifier position” property in the next column.

No problem, that will do, thank you! Being centered inside the hairpin is also ok in this case, but just to know, can you please confirm me that it’s also presently not possible to make it centered outside?

Yes, I can confirm that: it’s either outside at the start, or centred over the middle.

Ok, thank you for confirming!

While exploring this a bit more, I realised that one can use space or tab characters before the prefix and/or suffix text. The problem is that its position gets messed up in the part, as I couldn’t set that particular property to “Locally” and remove some spaces in the part suffix… 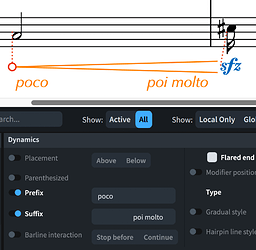 In this case, would adding a flared end to the hairpin convey the desired intention?

A bit, yes, although I tend to see the flared end as a very subito dynamic change (I must confess that I’m also not a big fan of flared ends). Anyway, in this case I was just exploring the possibilities.
I used your “inside” suggestion, which adds the bonus of saving some vertical space. But also because of particular spacing cases, it’s better to have more options to place things.

To recreate your last screenshot, you could also use two separate hairpins, each with their own prefix text, and tweak their apertures in Engrave mode if you want them to line up.

I’d never though of that! It’s a bit laborious, but it works quite well, in full score or parts. It’s good to know what can be done, although for very specific cases like this a staff-attached text may be better.
Anyway, thanks to your suggestion, I realised that there are more hairpin property options in engrave mode, namely the “Modifier offset”, with which I can put after all the prefix/suffix anywhere I want (although not both independently). Not as automatic as a real suffix, or the inside option, but it can be done.