I’m mixing an album in Atmos on Nuendo. I bought Cinematic Rooms, which supports up to 7.1.6. It was a bit tricky to set up, so I made a video. 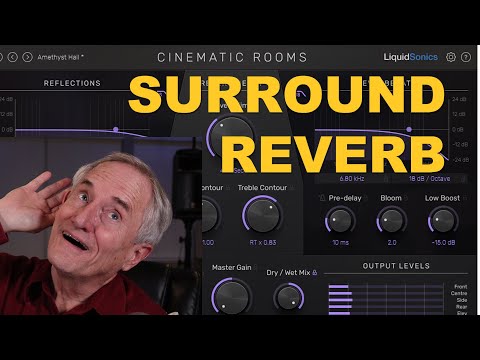 I hope you find it useful.

Thanks for the video.

Did you try just making the group with reverb into a ‘set of objects’ instead? I understand that it would “anchor” the “corners” of that group differently than if it was a bed, but you would simplify routing by treating it that way. Last time I tried this a 5.1.4 routed (I think) correctly into the renderer as one set of objects.

Hi Mattias,
Thanks for the comment. I did describe splitting the reverb into a 7.1 bed for the head-level channels, plus two stereo objects for the front and rear height channels respectively: Setting up surround reverb in Dolby Atmos with Nuendo (Cinematic Rooms) - YouTube

I think you misunderstood what I meant.

Instead of using a 7.1.4 bed within the renderer you could instead take the group track you created and make a set of objects out of it - not a bed. I only mentioned 5.1.4 because that’s what I tried. If you have set that 7.1.4 group track to output to a 7.1.4 output then as you make it into an object (a ‘set’ of them) the channels will pan logically.

We discussed this here:

Thanks for the tip @MattiasNYC! I wasn’t aware it was possible to add a 7.1.4 group in Atmos. I made an update video about routing Cinematic Rooms as a 7.1.4 multi-object. 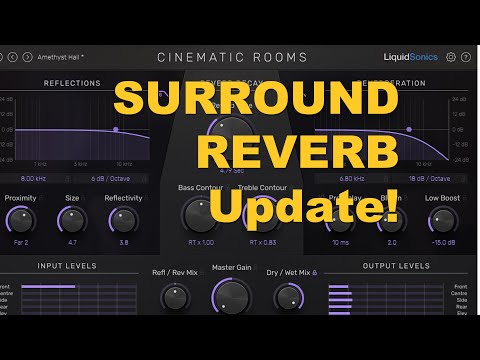 I’m an avid user of Windows based Nuendo and Cinematic Rooms Professional, and have struggle with this very issue, in short - all surround capable plugins, no matter the type (reverb, delay, EQ, etc) are better off used/more predictable in the bed. Otherwise your mix will fall apart when down mixing or re-rendering for other than Atmos. You will encounter problems with gain staging and complete dropouts due to the way distribution of sound across the channels is managed by Atmos. Beds naturally spread the sound across channels, while objects are a point in space , and can only spread sound up to the ceiling channels.

I would suggest taking a closer look at Dolby Atmos Post Production Learning section 9.3 on learning.dolby.com on considerations of beds vs objects. And, Maggie Tobin’s excellent video on how to exactly deal with surround capable reverb and delay in Atmos: Intro to Dolby Atmos Music Mixing at Home | #WAM Everywhere - YouTube

Thanks for the reply, Michael. @ClendeningSound

I have studied the Dolby documentation, and I’m not sure I come to the same conclusion that you do. Here are two statements from Dolby’s page https://professionalsupport.dolby.com/s/article/What-s-the-difference-between-beds-and-objects?language=en_US :

This implies that Objects placed in four corners of the ceiling would be sonically identical to a 4-channel ceiling bed. As far as I know, there is no such thing as 4-channel ceiling Bed, at least not in Nuendo, so we can achieve the same result with objects (as long as we use the right settings).

If you have 4 speakers overhead, as I do, then routing Cinematic Rooms via a 7.1.2 bed will fold the 4 height channels to 2. In the last sentence Dolby says “try switching it to an object…” which is what I’ve done.

“Sounds that are intentionally diffuse in the overheads, like reverb, are best placed in the overhead Bed channels, which cover the whole ceiling. Using Objects, especially without size metadata, may be too focused to be as effective.”

There’s a very important point in the above statement that needs to be unpacked. The underlying recommendation is that a diffuse sound is better managed as a Bed, because it’s easy to get in trouble doing it with objects. A stereo reverb return is a great example of a diffuse signal: it has very low correlation and creates the effect of sound coming from everywhere in the stereo field. It is the low correlation that gives the wide, diffuse, stereo effect. If we want this stereo reverb return on our front wall, the safest and simplest way is to use a stereo bed so that the signal is routed directly to the left and right speakers. If we use a pair of objects instead, we must make sure to have Size at zero, and position the objects as close to the L and R front speaker positions; otherwise the Atmos Renderer will start cross-propagating each channel to the other side, which reduces the stereo width, and possibly causes phase issues as well.

With Nuendo’s implementation of Atmos, I don’t know how to achieve “overhead Bed channels.” Only a 7.1.2 bed supports elevation channels, but there are only 2, not 4. Therefore in practice, we must use correctly-positioned objects without size metadata to place our diffuse sounds where we want them. To the point above, if we do it correctly, the effect of using a pair of correctly-positioned objects will sound identical to a bed.

This is exactly what Maggie Tobin does in her reverb example: she augments her surround reverb on a 7.1.2 bed with two instances of a separate, stereo reverb that she routes to objects in each of the four corners of the ceiling. In my “update” video, I’m using the latter technique but using only one reverb, and objects placed at all corners/speaker positions of the surround field.

@leobro You opened with the statement you did not come to the same conclusion, but you actually just concluded the same findings I have.
Surround capable reverb VST returns are best managed in the surround beds. Use object stereo reverbs when filling holes and other adventurous sound design elements. But, one thing I left out of my original response is - most of the Dolby Atmos learning/training that is out there today is adapted from Cinema workflows, and does not properly transfer over to the streaming services, where the bulk of music listeners will be (codecs are the thing to look at, and how they handle folding/unfolding Atmos beds/objects). So, here’s my tried and proven predictable workflow for Windows Nuendo 11.0.41:
1 - If mixing for streaming music services like Tidal, Apple, and more to come, there is almost zero value in mixing Atmos in anything other than headphones. Find the right combination of using a VST ambidecoder (Steinberg’s works perfectly for me). And pink noise balancing your audio monitoring to both open and closed high-quality headphones - I use both open/closed backed Audeze (very unforgiving headphones). 99% of the time, I can say I have arrived at WYHIWYG.
2 - As I mentioned before, I start with the end in mind. For me, 100% of the music I work on is going to streaming services. I posted a slimmed down version of what that is over here: Since Nuendo does not provide a consumer format for Atmos distribution - #5 by ClendeningSound

1 - Start in Nuendo (Windows for me) with a 7.1.4 mix, rather it be stems or net new project with midi instruments (orchestral style).
2 - Export ADM, with appropriate trim and binaural mixdown settings.
3 - Copy ADM to shared drive/cloud/etc.
4 - Open ADM on Mac Dolby Production Suite.
5 - Export to .mp4 with black video
6 - Play .mp4 on Mac and stream to AppleTV and listen on AirPods, Atmos sound bar, Amazon Studio.
7 - Once it sounds good on the aforementioned devices, prep for AvidPlay distribution.
8 - Mixdown a stereo version (just to satisfy AvidPlays requirement to have a stereo version if you have an Atmos track).
9 - Publish to AvidPlay to all Atmos capable services, for the ultimate verification, then do a take down once you have verified it (if you’re not happy with it).

I’ll finish-up here by saying, everyone’s workflow is unique to them, unless you are integrated into a larger team or part of a production that demands specifics, and even then there’s room for the unknown. Stating the obvious, what works for me, may not work for anyone else.

This workflow works for me and is nearly 100% predictable from: Windows based Nuendo, tested through Mac based Dolby Production Suite, processed up through Atmos capable streaming services and out to the endpoint devices - AppleTV, iPhone, Amazon Echo Studio, variety of Atmos capable receivers and sound bars.

From a purely theoretical standpoint I’d say that part of a reverb plugin provides arguably non-diffuse content, meaning early reflections. So I think there’s a case to be made for why some content might benefit from being ‘anchored’ as objects in the top layer.

Of course there’s nothing prohibiting doing either, and if treating reverb as a bed it’s still possible to use a dedicated delay chain for the top if that enhances the experience.

Again though, the above are just my thoughts on it from a theoretical point of view.