Hi, I have a strange problem with a project: System objects (tempo markings and rehearsal marks) which should appear above the string section jump one stave up at some part in the score (after ~150 bars) and appear above the soloist from there on. They stay there for a while and then jump back above the strings. Has anyone seen this before? In the layout options they are set to appear above woodwind and strings.

I should mention that the file comes from an xml import. I cannot share the full file here but I can send it per pm if someone would be so kind to take a look. 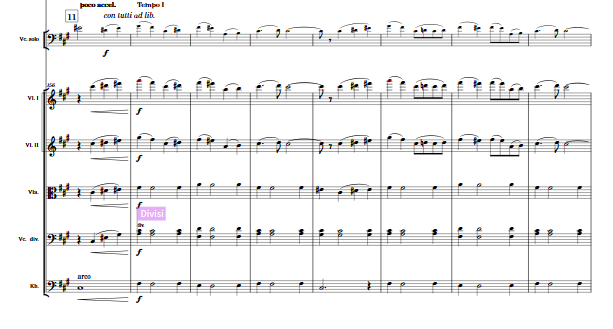 Can you attach the project, or a cut-down version of it sufficient to reproduce the problem?

May I send it to you by pm?

This might be a stupid question but have you tried deleting and recreating the system objects?

Daniel is (hopefully) asleep. I’m in Australia and wide awake - feel free to send it to me and I can try figuring it out!

Hmm, I tried now deleting and re-entering, but sadly it didn’t change anything. Anyway, as suggested I cut down the project and will attach it here. I tracked down the jump to one specific system break.
Konzert für Violoncello und Orchester_demo2.dorico (999.6 KB)

It’s to do with your bracketing. If you delete the Bracket and Barline Change signpost at the top then it fixes the problem (I think?!).

You might want to turn Condensing off, go back to the beginning and double check that all the brackets are as they should be. It looks a little funny to me.

Apparently when I delete the bracket for the solo Vc the problem also vanishes. Which is strange, because on the first 10+ pages this bracket does not influence the position of the system objects. I cannot really see though, why a bracket change (Note: the one you referred to was just for the bassoons) should influence the position of system objects?

However, maybe it’s best to leave out the bracket for the solo Vc. By the way, is there any convention about how to bracket soloists?

I’d say the main cause is the xml import, but who knows

If you turn Condensing off and go back to the beginning, you can fix the Bassoon bracket there and not need the change. Check the Horns too - they surprised me.

Is there any particular reason why you don’t want the default bracketing that Dorico provides? For example, I’ve attached your file with the default bracketing, except for the Solo Cello which is now not a part of the strings.
Konzert für Violoncello und Orchester_demo2.dorico (950.5 KB)

By the way, is there any convention about how to bracket soloists?

I’m not at liberty to say…

By the way, is there any convention about how to bracket soloists?

Surely not together with the strings. Usually they don’t get a bracket at all, in my experience.