A possible bug: When I opened a project I did in v. 1.0.3, the Layout Setting for showing tempo markings, bar numbers etc. showed them on too many staves.

In the original version, when I selected Woodwind and Brass to show such markings (in a concert band score) they appeared correctly over the piccolo and trumpet 1 staves, the first staff in each family.

In the same project in the new version, they now appear over the piccolo, clarinet 1, trumpet 1, horn 1, and trombone 1 staves.

As always, thanks for the help.

You choose on with instruments the system texts (tempi markings and the new system texts) appear, in Layout options, Staves and Systems page, all down to System objects. Just untick the instruments where you do not want those to appear.

Thanks, Marc, but that’s where the problem is—the instruments aren’t listed there, only the families.

As you can see in the attachment, the only choices are Woodwinds and Brass. That worked fine in the previous version—I only got system markings (rehearsal letters, tempo marks, etc.) on the top instrument in each family. However, I’m now getting them on the top two (WW) or three (Brass) instruments in each family. 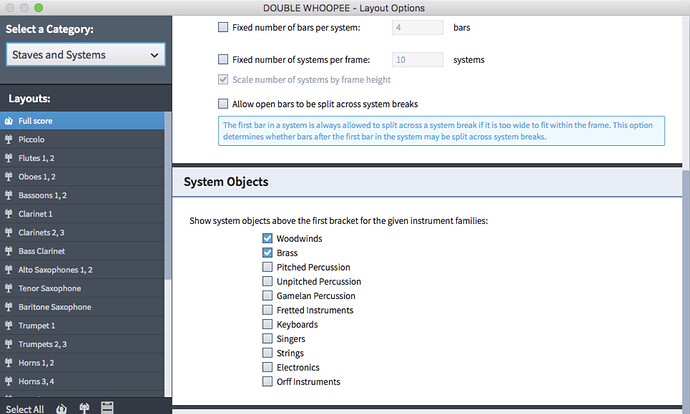 I have a score where I get them on unpitched percussion regardless of setting, and they will not go away… Wouldn’t rule out that there’s a bug here…

If you can attach the project here, we can take a look. Unfortunately it’s very difficult to diagnose this problem without being able to see the project itself.

Thanks for offering to look at it, Daniel. The project is very large (43 MB), and it wouldn’t upload. So I copied the first flow into a new file, and that one’s much smaller—I’ll attach it.

I thought I had a theory—I just noticed that the system markings appeared above each group of bracketed instruments. That was the case in the original file. However, in the exported single flow, though the bracketing is the same, the system markings aren’t appearing over the clarinet bracketed grouping. So I’m back to not knowing what’s causing it.

Hope you can figure it out.

[OK, a problem—when I tried to upload the project, I got a message saying something like “Cannot upload files ending in .dorico.” How do I upload a project?]

[OK, a problem—when I tried to upload the project, I got a message saying something like “Cannot upload files ending in .dorico.” How do I upload a project?]

Rename the file extension to .zip

Or, better still, actually zip it up into a zip archive.

New problem—the max size for an upload file is 2MB, and both my project and the zipped version of it are 2.9MB.

I don’t have any idea what to do if compressing it doesn’t reduce the file size. Any suggestions?

You can email it to me, Lew. My email address is d dot spreadbury at steinberg dot de. Please include a link to this thread in your email so that I can keep track of what I’m supposed to be looking at.

Thank you, Daniel. I’ll do it when I get home later this afternoon.

I’m using Dorico 4, and found what might be a related bug. I have my tempo markings as system text, and had a full score that was working just as I had set it up, where those system objects were showing at the top of each system as well as above the Strings. Then for each ‘section’ of the orchestra (based on how it will be recorded), I created some new Full Score layouts (via the button with the conductor icon in Setup, with title “Add Full Score Layout”)

What I found would happen in some cases was that the tempo markings would show for every single staff, even though these were system objects. I found that if I just deleted the tempo marking, and then Cmd + Z to undo that deletion, everything would show correctly.

I don’t have a file that demonstrates this issue at the moment but if it is useful I can try to recreate the scenario and send it your way.

There’s a “glitch bug” that sometimes displays system text as staff text above all staves. If I close the project and reopen it, the glitch is gone… Have you tried that? If the problem persists, I bet Daniel Spreadbury would be happy to receive the project…

If it happens again I’ll try that as a workaround, but hopefully the underlying bug itself is an easy fix for the developers.