BTW the latest version of WaveLab (I have 10 elements) has the tabbed plugin design just like in Studio One. WTF did this happen? Nice, now bring it over to Cubase! And make it work better for multi-track use. 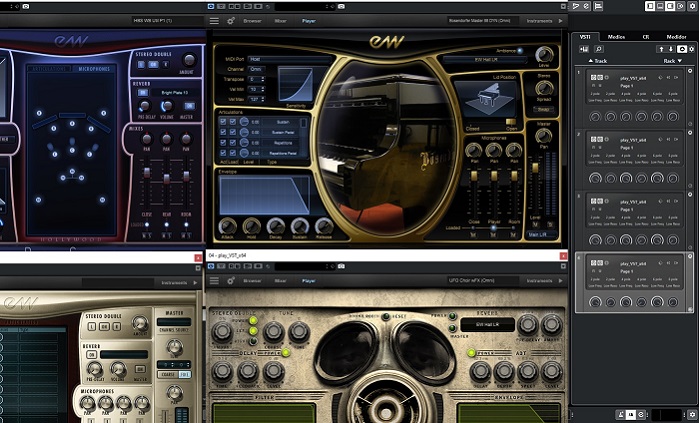 A year since any activity on this topic, giving it a bump since I think it’s time to bring this one to the table. Giving it a vote, too.

It’s a very good workflow improvement, and it should not take much development resources to implement.

With the additional option of “follow track selection” (option directly on the tabbed window), and key commands for tab switching forward/backward, it will be VERY good. This feature should be prioritized.

Also, this is a feature that will be useful for EVERY Cubase (and Nuendo) user. And by so, giving everybody a reason to update…

No matter if you are a pro or a hobbyist, no matter what genre you are into, if you are into MIDI or Audio, experienced or a beginner, if you are using Pro/Artist/Elements or even Nuendo, everybody will have use for this feature to avoid much of the daily annoying click party with plugins.

+1000x2000
lot of FR threads opened just for this FR
i may add, tabbed window + option to follow track selection(vst+vsti)

Another feature within the feature:

If you added this, it might be the only thing that doesn’t piss me off about Cubase 11

I think it would be a fantastic feature! I explained it in another way in another thread, however, it’s exactly the same proposal request! I really hope that some attention will be paid to this aspect as it is of considerable interest to the users.

Studio One for plugin chains has a tab option where you can switch from one to another in the same window without having to open all plugins in a chain, this does not mean that if you go to the mixer track, you can not open one by one and have them all open in different windows, it is simply an option that allows you to see the chain in a fast way, as if it were a single plugin, which I find quite comfortable and I think it can speeds up the workflow in certain situations, it would be great if C…

I am surprised, that this FR which was started on the old forum from 4 years ago and has that many votes, cause the vote system is basically brand new and usually people don’t go search for that old threads.

So this means there are a lot people requesting this, which makes me happy. Voted as well (I put my +1 comment here 3 years ago)!

Yeah. This is already implemented in Wavelab. Would think they could adapt the code to Cubase.

Steinberg did it in Wavelab; or at least the floating, tabbed portion. The tracking to track selection I assume might be the deal breaker then? [image]

Exactly. Just look at how it’s done in the Wavelab Montage and use the same idea for channel inserts. If it’s an instrument channel, put the instrument on tab 1.

Yeah. This is already implemented in Wavelab. Would think they could adapt the code to Cubase.
Option for single plugin window that follows track selection - #13 by SF_Green

Oh nice, did not know about that.
Yeah a simple tab bar somewhere on the upper side of plugin windows would do the trick!

Another vote from me for this.

if this has already been implemented in Wavelab, I have a feeling it’s coming in C12.5…

You’re quite the optimist…

Well it happened with nuendo, there was dolby atmost first and Maat, so I hope tabs come soon after wavelab!

Wasn’t it already implemented long time ago in wavelab?
I hope you’re right, been waiting for this for years.

This would be the best feature to have in the next version !