Tempo equations at the end of a system

Is there a way to display a tempo equation at the end of a system and duplicate it at the start of the next system?

At the moment, I’m dragging it all the way across to the start of the new system, but would be nice to be able to have it in both places in the same manner that a meter change is duplicated:

I think I have never seen a tempo equation doubled in a score, but it would be nice to have an option, where you place it. (Similar to dynamics, where you can decide, if you want to show it before or after the barline.)

Would using MusGlyphs help you here?

+1 I don’t want to duplicate the marking in both places, but I agree that there should be better control of these sorts of equations. When these sorts of transitions occur on a system break, I think the equation is better off before the system (or, as Elaine Gould offers on pg. 186 of Behind Bars, split over the system break). BUT it’s unbelievably annoying to do this if you’re making instrumental parts—if you have a multibar rest right before the system break, it’s super clumsy to try to add an equation right at the end of the system.

Yes, Musglyphs or Metrico are great fonts for actually typing in the equation (although they don’t nearly cover all possible cases), but that doesn’t help with actually getting the equation in the right place in all the parts and the score. 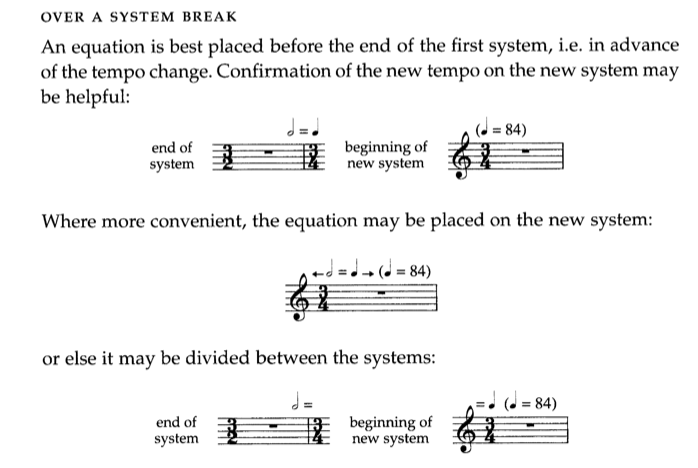 @high5ths Can you give cases that can’t be covered with MusGlyphs etc?

The developer of MusGlyphs is open to improvements, I know.

The equation repeated in brackets is pretty much what I’d like to be anle to do.