If anyone reading this doesn’t like this font, I’d be really curious to understand what it is that they dislike.

I don’t care for the curlicued (for lack of a better term) top serifs of the r and a. It’s a nice font, don’t get me wrong, but those struck me right away.

Same. I fear they will make the font look a little finicky at small scale.

I agree with you. I also feel those serifs may fill in a bit at smaller sizes.

Also, it’s these kinds of topics, that for my money, really make this a great place to hang out.

The lines are skinny and shape is fat!

Thank you everyone, I think I understand. The extended bottom curls and the rounded crossing of the “t” are the elements that to my eyes gave it character and made it stand out.

I don’t know the right way to evaluate but when browsing literally a ton of fonts in the last two days my strongest reaction was: wow, with most fonts it’s an ocean of cookie-cutter sameness.

Now, looking specifically at the balance between the elements and trying to imagine if the font would be legible at smaller sizes gives me a whole other way to look at it that’s more pragmatic. Thanks! I’m getting into the weeds with high-low contrast and stuff like that: 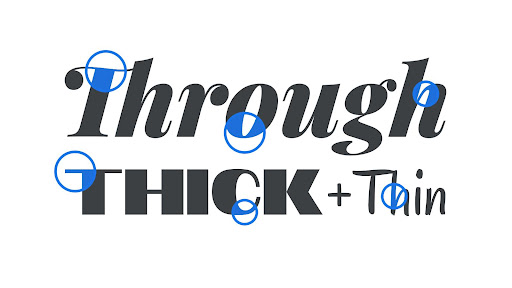 The difference between the thick and thin parts of a stroke. A monolinear typeface has low stroke contrast, and is the opposite of a high contrast face.

I wonder if there’s a good way to strike some kind of balance between the font character that’s not too hidden, how it should align with the music itself and the technical legibility.

with most fonts it’s an ocean of cookie-cutter sameness.

yes, sadly. Many are literal copies of others.

I wonder if there’s a good way to strike some kind of balance between the font character that’s not too hidden, how it should align with the music itself and the technical legibility.

You’re hitting on all the issues that make selecting a good music text font so tricky. The following is all my personal opinion, so I’m sure others may disagree with some of this, but here are a few things I look for in a music text font:

All good arguments. When you say the font should not be “visible” to the performer, i.e. it should not have too much character, would you agree that the font subconsciously conveys a certain mood: classic, strict, playful or whatever. Depending on how important this mood aspect is for the piece, I will try to find a suitable font. That’s how it used to be with books. The writing and the cover matched the content.

Of course! The subconscious effect certainly is important. I just meant if the performer is slowing down to notice certain quirks of the font, then that is impeding the left to right reading flow and is a detriment to legibility.

I would amplify Fred’s visibility point more literally: the font must be readable in poor light!

Thank you for this. I’ll need time to digest it but wanted to clarify or get more insight on your #8:

… in general we are stuck with dynamics and time signatures that have a very strong contrast between thick and thin strokes. Picking a typeface that works well with these elements seems important to me anyway.

This makes me wonder about two things: a) taking it even a step before the time signature and b) the structure of the overall design process. What I mean is whether one approach could start with the music font rather than the text font and even more specifically - with the staves (as a kind of a grid), that’s then followed by time signature/dynamics, and with text font added as a third step as a layer.

Staff thickness to me seems to fix the visual “weight” of the page, for lack of a better term (this is an observation after experimenting with it following Ben’s comments earlier).

For example, this page makes it very easy for me to focus on the music, the music literally jumps from the page: 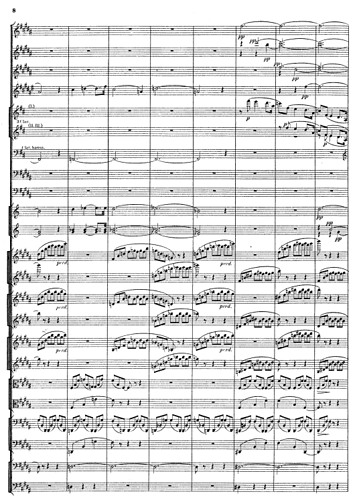 But this page looks heavy, like the music is behind bars or the bars are crossing out the notes (I’m not sure how best to describe it), even though maybe it’s more uniform in appearance: 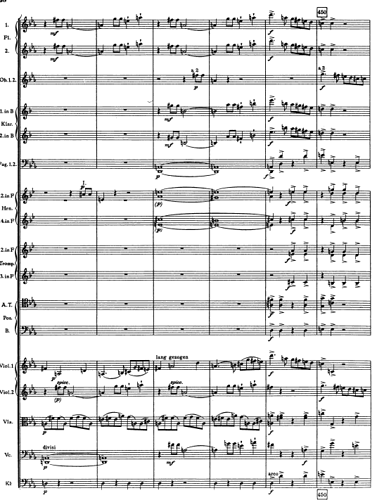 Perhaps I’m comparing them incorrectly, but I’m wondering if, when following this logic, the higher contrast font would fit better with tinner staves, (edit: i.e - a kind of a uniform background layer related to the underlying “grid” so that the noteheads are in the spotlight). And, secondly, if selecting all of the elements (staff thickness, font width and thickness, etc) quite deliberately against the notehead is a useful method in the sense of having your own process? Not sure if I’m making it easy to understand what I’m trying to say…
FredGUnn September 6, 2022, 4:55pm #33

I guess with comment #8, I meant I prefer music typefaces that have similar thick/thin elements. Obviously if you are using a more humanistic music font like November 2 (especially with dynamics) then perhaps an old style font that has a more gradual contrast would work well. For use with Bravura, I tend to favor modern and transitional fonts. As discussed above Academico is from the Schoolbook family, but all Scotch Romans work well too I think, as long as the serifs aren’t distracting. In terms of “invisibility” and large and useful type families, I think many “newspaper” fonts are probably excellent for music as well. There was a period when many publishers used didone fonts with really strong contrasts, and obviously Henle still does, but it’s not really my personal preference.

For your music examples, the first thing I notice is the spacing LOL. The top example Dorico would probably say is 110% or something. I can’t really get a feel for the barline thickness and weight from the small images, but sure, finding something that feels right in the context of the page seems more important than what it looks like devoid of any context.

Fred, thanks so much!

In terms of “invisibility” and large and useful type families, I think many “newspaper” fonts are probably excellent for music as well.

But please stop using Times.
And Finale, of course. 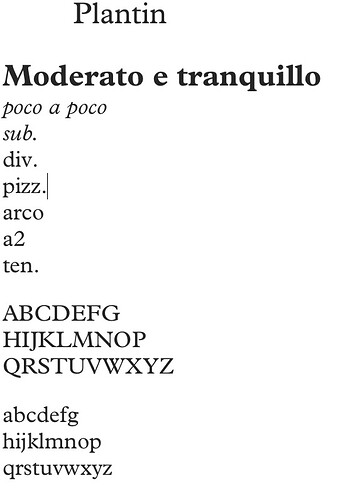 Plantin is used by OUP a lot. Is it the Sibelius default?

It’s quite wide; there are some narrower cuts that work a bit better.

Personally, I love these kinds of things:

But it does look a bit square and I’m not crazy about the angled M’s in general (no idea why!)

In terms of “invisibility” and large and useful type families, I think many “newspaper” fonts are probably excellent for music as well.

But please stop using Times.
And Finale, of course.

I agree for most uses, but I insist that Times New Roman is one of the best possible choices for lyrics.