Dorico trying to be helpful makes inputting something like this really tedious! 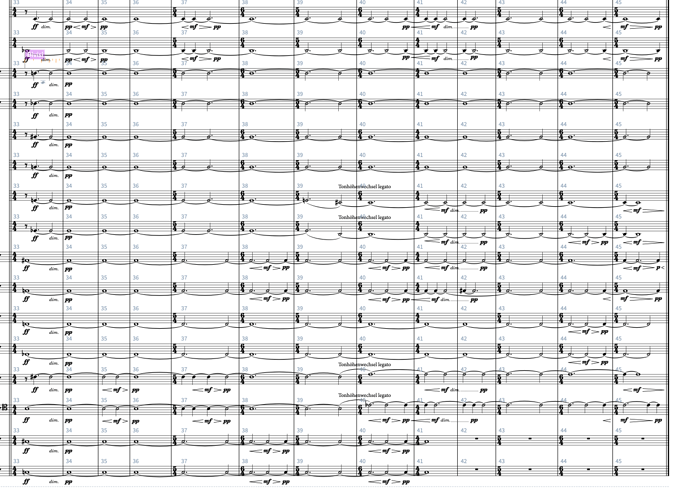 Use force duration on and rant mode off

force duration doesn’t work - when I retie the notes they revert.
Thanks anyway! Just needed to vent.

To use Force Duration with ties, every single part of the tie chain needs to have FD turned on, or else the whole thing will revert back to default.

I like this implementation in general, but it does make things harder sometimes.

I just created a dummy project where I placed several measures of whole notes. Holding down the shift key I hit the first and last measure of the series of whole notes then (all the whole notes highlighted) hit the letter “T” and they all tied together. That seemed pretty easy to me, so what am I missing?

ah I see, you’re right. (sorry @MarcLarcher!) I obviously wasn’t forcing the measures that conform to the time sig. groupings.
Still, for me the drawbacks far outweigh the benefits.
Thanks again!

I appreciate you taking the time to help. It is about the subdivisions within the tied notes. Dorico wants to make them back into whole notes (or the metrical equivalent), even if that isn’t what I want. But @Stephen_Taylor had the right approach one post above yours.
Thanks!

One further clarification: It’s not exactly that “every” note to be tied together has to be forced; it’s that the first note has to be, because the combined notes take on the properties of the first one.

Interesting, I clearly did not know that. Thanks!

Note that you can explicitly tell Dorico the way you want your different meters to be subdivided. For instance, you can write a 5/4 as [4+1]/4 or [3+2]/4 or [2+3]/4 in the Shift-M popover and Dorico should automatically respect those subdivisions, without even resorting to force duration (my quick answer was more a quip than a real answer, I apologize for it).

I appreciate the follow-up and no apology needed. I didn’t do that in this case since there are other things happening in the rest of the orchestra that don’t match this beaming. I thought it would have been just as fiddly to do that on a per staff basis as it was to use different voices.
But thanks for the input! I am sure more material like this is coming up so I will be able to try out the different techniques suggested here to see which is most efficient.

The suggestion from Marc is actually not that fiddly as it sounds. You can type the subdivisions in the popover, and while holding Alt you press Enter, to apply it only to one stave. Then you select that time signature and Alt+Click in every stave, where there is the same subdivision (Alt+Click is a method for copying things). That goes pretty quick I’d say.

We should also remember that it is reallllly easy to copy a rhythm entered correctly once, to another stave, and then repitch it. There is nothing about the original example that looks “tedious” to me. Between force duration, and copy and pasting, it would go pretty quickly for me.

Do I understand correctly that the notes in the example above should sound continously for many bars (a case for ties) or should there be some sort of articulation between them (a case for slurs)? Let me give an example from an other area: When a drummer should play brushes in a circular motion alternating hands each beat (called swirl) a typical way (although not standard) to notate is this:

The example shows how it looks notated both with ties and with slurs: very similar but not identical. In this case I usually use slurs rather than ties for two reasons: (i) as the drummer is expected to articulate individual notes each beat rather than one long note, slur is the more logical way to notate. (ii) slurs can be simply deleted whereas ties cannot.

slurs can be simply deleted whereas ties cannot.

You just press U?

. Thanks Daniel to point this out!