This is a snippet from the first movement of Gustav Holst’s The Planets, Mars the Bringer of War.
I am having much fun with it, studying the score, and working with it in Dorico. I am just a hobbyist here though and I have run into an area where something seems a bit off in the original published score, or at least my ability to interpret it correctly. 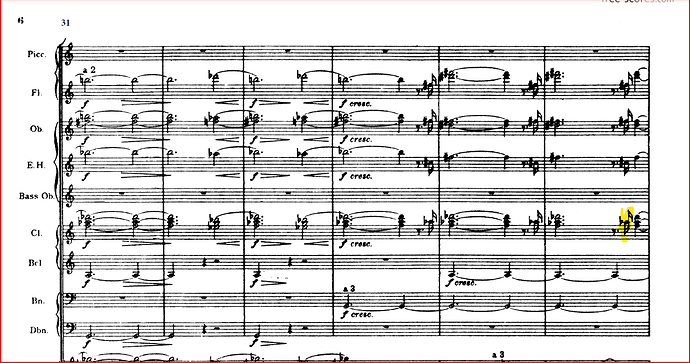 The clarinets are condensed to three on a staff but in bars 34, 35, and 36 (I added the bar number to the snippet), you see a sixteenth with opposed stems. Normally, I would assume that this is two players. However, the engraver does use A3 on the bassoons, but then that note is tied.

My question: Is there a convention for condensing a single note for three players using up/down stems, (in some cases) or am I just reading too much into this, and it is (what it appears to be) just two players?

I don’t know for sure, but if you look at the other staves, you will see that they also jump from shared to split stems only for the sixteenth-note (and also do so for the bars before).

My interpretation is that the engraver didn’t want to use shared stem unisons to not give the impression that only one player would be playing.
So for me the instruction reads: „not only one player“, which in the case of flutes means two, and clarinets would be all three.

But that’s just an educated guess from my side.

I’m curious if there are other ways an engraver could show that note as a3 unison. Writing a3 for a single 16th note seems off somehow…

That is a good insight.

In fact, to get those opposed stems in Dorico, at least in the case of the Flutes, you must do a condensing change over to upstem and downstem voicing for the two flutes and uncheck ‘allow mid-phrase unisons’. If you have the condensing set to both voices upstem, Dorico will mark that sixteenth as A2. even though the beginning of that staff is already marked A2. So it stands to reason that there is a rule engaged (but which?) when both voices use the same direction to mark as A2, but not when opposed, but for three players in Dorico, You can either: at least one player down (and to match the engraver - hide the player numbers), or just leave them all up and let Dorico mark it A3…

Right - so if all three are playing the same note, then show with flipped stems.

In case of the two flutes, do the same if opposed, but if the stems are both up then mark it A2 even though the preceding note was already in unison (A2
)… (this is why it sticks out to me)…

Unison only holds until the first rest, or the end of the system after which it must be stated again. I checked (tested the theory) by cramming an extra sixteenth on the flutes after the tied note in bar 34, which reduced the rest there to 1/8 from 3/16. The extra 16th was not marked by Dorico as A2, the only difference between these unison 16ths is the rest between them.

Mahler’s middle-period scores have many occurrences of 3 unison noteheads (side-by-side) on one stem in the winds. I don’t recommend this as any kind of standard, and I think it would be impossible to get Dorico to do it via proper condensing.

In this Holst example – a similarly large orchestra – it’s obvious enough that the winds have this very brief unison that everyone reads the shorthand without having to think about it. But Dorico doesn’t have a way to draw 2 stems for 3 unison notes and still print the parts correctly.

Thanks. In fact, thanks to everyone here that replied.

Yes, I can see where a three-stem note would be a monstrosity…

My confusion was in comparing the two flutes to the three clarinets, and assuming that the flipped stems 16th there were a stylistic choice, where in fact it must be indicated as a unison (either by an a2 marking or flipped stems) because of the preceding rest.

In the case of the clarinets, since we cannot have or should not have three stems, use the flipped stems as a unison indicator for all three.

If it were something else, a unison of two (out of the three player), there would be two notes showing at that same rhythmic position with (most likely) flipped stems, and likely a player number indicating the odd man out at the least.

Just for everyone’s edification though, this is that very same piece of music, same system even, bar 34 - the horns. Here, the unison is marked with an A3, yet in bar 35 it is not, even though there are intervening rests. Makes one wonder…

Right. It’s just that Dorico wants to mark bar 35 A3. You will have to manually hide the player marks here to get the same results., and that suggests that there’s a rule in play.

However, if we ignore the rests in between bar 34 and 35 in the horns because, if presumably, they have no effect on unison (no marking required in 35 of the horns…we’re still in unison), than why bother with it at the end of bar 34 of the flutes above as, again, presumably, it is still in unison there too?

See what I am getting at? The presence of a rest in Dorico apparently resets it’s requirement to display player markings for unison unless deliberately overridden (a rule? ).

If we use the Horns example as our guideline (assume rests have no effect on the need to re-indicate a unison) it then suggests that in the case of the Flutes, bar 34, the indication is not needed there as well (superfluous?) and yet, there it is with the flipped stems, indicating a unsion. Of course, Flutes bar 35 then divides, but I don’t where see there is a requirement that a preceding unison be marked as such (in light of it already being unison at that point in time), plus the divided voices that follow the unison are plainly and simply obvious (there’s more than one notehead…) .

However, if we have rule that player markings are required for a unison following a rest unless overridden or flipped stems (if just two voices) than Dorico makes perfect sense, yet the score disagrees.

I can’t help and wonder if Dorico’s behavior on requiring player markings following rests is simply following best practice with player markings (as any software developer would likely do), yet it’s still not a hard and fast rule and it’s still fungible area decision-wise, because the score seems to indicate so,

If it is a firm rule, then it would indicate a missed marking in the score for the Horns in bar 35. It happens. It is just that I do not know what the convention is or should be.

I agree that we all know composer’s intent (most important) but, well, I AM a software developer myself (retired) and I can’t help but notice the difference in logic here.

The presence of a rest in Dorico apparently resets it’s requirement to display player markings for unison unless deliberately overridden (a rule? ).

Exactly. If one does not want the a2 repeated in such cases, one can hide it. As Dorico is the first (and only) notation program to introduce Condensing, presumably some preliminary ground rules had to apply to get it to work. I’d rather put up with small “logical” inconsistencies than not have automatic condensing at all.

Thanks Derrek - exactly the reasoning I’m going with.