Firstly, since I updated, I now get a message that I have never seen before which I have attached below. It pops up behind the Cubase project window and, until I click OK, it seems to cause audio pops and crackles?

Secondly, and also since the update, every time I open Cubase it asks if I want too use the same audio device, which never happened prior to update and is very annoying!!

Anyone got any ideas?? 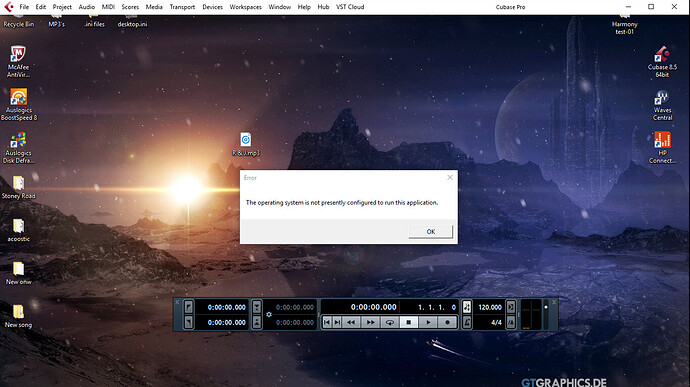 I’ve never seen that message, in WIndows 10 or any other Windows, sorry.

The issue about asking which audio device: do you mean asking which driver? I get that on my desktop since 8.5.1, but it also has a check box for me to tick if I don’t want to get that message again.

Thanks for the response Plectrumboy

As far as the message is concerned I don’t know if its a Cubase or Windows 10 problem so I’m hoping a mod will chime in.
Regards the audio driver, on the original Cubase install I checked the box and I then had to assign an audio driver every time I opened the programme.
I’ve got used to Cubase remembering my driver, but it doesn’t seem to want to since the new update?

Interesting; I’ve just checked the box on my desktop and upon relaunch, I don’t get asked that driver question again. Have you got two audio interfaces connected by any chance when you start Cubase?

The only interface I have is the CI1!