Can I change the unreadable fonts in the channels on inserts, EQs, and strips from white to black?

This is not supported screen resolution.

This is not supported screen resolution.

I have a hunch favedave is aiming at the opposite. He has a much higher screen resolution and therefore the letters become very small.
Unfortunately he seems to be rather emotional in his posts, so it is hard to deduct what the issue is.

Can I change the unreadable fonts in the channels on inserts, EQs, and strips from white to black? Or make them bigger?

I assume you can make everything bigger by using HiDPI. This is in Prefrences → General. Not sure if it looks different on Mac. 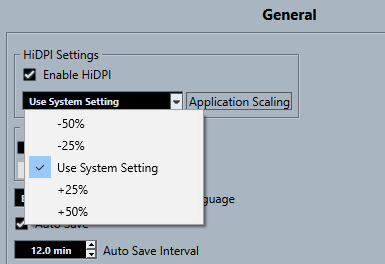 Not sure if it looks different on Mac.

This settings is not available on Mac at all.

Thank you for the effort, but these is no such thing on a Mac

Cubase would have to implement it like other programs do.

Basically, it’s sloppy programming. As someone diving into this for the first time, the priorities of a company become apparent by what they choose to work on. Their recent update, for example, gave you a whole bunch of keyboard shortcuts for moving your cursor/selection around! What a waste of resources to implement something like that. They could’ve made real improvements that I see many users here have been asking for for years… for decades! But instead of giving users what they want and need, they go “Hey – now you can use this key command to move instead of your mouse – saving you absolutely no time and providing zero benefit! You’re welcome!” And they made a HUGE deal about making the scroll bar a few pixels bigger!

I’m just surprised by some of the poor design decisions for a program that has been around for decades, especially since I see long time users have rightly griped about it.

Anyway, it is what it is and as I learn it I’ll decide if the benefits outweigh the drawbacks. Which Logic has aplenty, too.

But I sure appreciate this forum explaining how things work.