I am having a similar problem with a basic drum set. I have watched the videos that never seem to have this situation. But I cannot get around it.

See Perc Extra Rests.JPG. I get along fine with snare and bass, but in measure 9, after I to the crash symbol. that voice is adding rests in every following measure. I can’t get rid of them. I tried setting that crash as the end of the voice. I tried the notation option “Do not pad voice with rests”, and several other things. I had been making some voice changes manually, mainly because I find the whole voice thing completely disorienting. I can never tell what voice I am in.

I deleted the entire player and started from scratch with “Use voicing defined in kit editor” but the problem persists.

A similar problem appears at bar 29 with unwanted rests before and after the ride cymbal. See Ride rests.jpg.

What am I doing wrong? This cannot possibly be right. 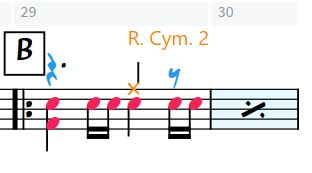 I’m a total novice when it comes to percussion in Dorico, but I thought I’d retype your problem bars and try to figure it out.

Through to letter B (my letter B, not yours) I didn’t touch voices at all. I just played in pitches on a MIDI keyboard, with the F, C and A above middle C (imagine you’re in treble clef). Dorico knew to give the crash cymbal an upstem and automatically put the snare and kick on a downstem. At B I played in the ride cymbal. I then selected the note, right-clicked, went to Percussion > Change Voice > Extra Up-Stem Voice.

Through to letter B (my letter B, not yours) I didn’t touch voices at all. I just played in pitches on a MIDI keyboard,

It seems like I did exactly as you did, except I entered the notes from the PC keyboard instead of the MIDI keyboard. I did not use voices at all. I see in the percussion kit, it has everything assigned to voice 1.

I created a whole new Dorico file and added a player with the basic drumset. I pasted in the first 10 bars and the rest problem did not appear on this new file. So evidently there is something really hosed in my Dorico file. I would have thought that by deleting the player entirely and adding a completely new players, that would clear out any residue, but I guess not.

I wonder if anybody has any best practices for rebuilding a Dorico file that has been corrupted. I’d rather not have to rebuild everything from scratch with cut and paste. I tried an XML export and import into a completely new DORICO file. The rest problem remains, and many other elements are messed up or missing, so that’s not a good option.

Did you try this?

Did you try this?

No. I missed that. I was looking at Voices -> Change Voice etc.

Your command works !!! But now I am more confused than ever. According to the voice colors, the crash cymbal was ALREADY on a different voice, even though in the percussion kit, everything is voice 1 by default.

And if I make the crash cymbal voice 2 in the kit, that does NOT fix the problem. It seems completely wrong that we should have to enter your command every time we use the cymbal. And why is the “percussion voice” different from other voices"? This seems really convoluted.

Anyway, thank you for that workaround. I hope that is not the final answer. But it will let me finish the project.

Percussion voices are different to regular voices because they’re not actually voices at all - they’re a representation of a multiple separate staves condensed onto a single five-line stave.

From my experiment, I don’t think you need to make the crash cymbal another voice; you just need to ensure that your crash and rise cymbals are on different voices to each other or Dorico will try to pad the gaps with rests.

From my experiment, I don’t think you need to make the crash cymbal another voice; you just need to ensure that your crash and rise cymbals are on different voices to each other or Dorico will try to pad the gaps with rests.

I had to change almost every cymbal strike in the entire piece with the Percussion > Change Voice > Extra Up-Stem Voice.

And I am still left with some whole measure rests I can’t eliminate. See picture. I can eliminate those rests by switching to the Notation Options -> Percussion -> Use Single Voice. That means I have no control over up stem for cymbals and down stem for everything else, but it is OK for this project. That’s surely not a general solution though.

Wanted to resurrect this thread because I’m having a difficult time getting Dorico to quit padding a drum set part with rests.

Attached screenshots of what it looks like, and so far the only settings I’ve changed from the default. I’ve also set snare and floor tom to go stems-up. 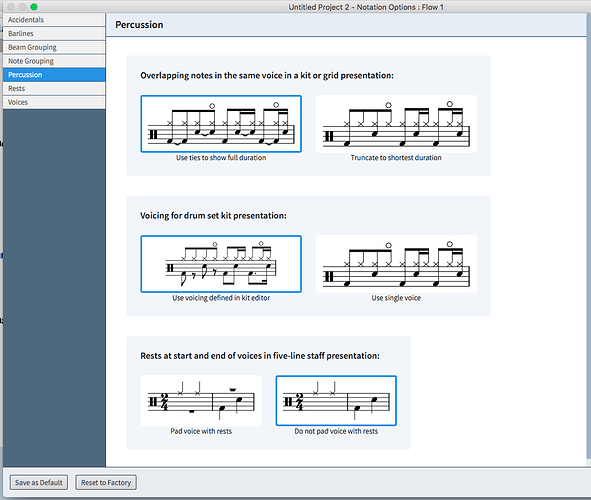 I appreciate the reply, but it doesn’t look like that conversation would solve specifically the rest-padding problem I’m having. Unless there’s a deeper thing there that I’m missing, which there probably is.

I’m not sure exactly where you do want Rests and where you don’t, but
a) any notes you move to an “extra” voice won’t be padded with rests
b) you’re not limited by the default voices - if Upstem Voice 1 has a bar rest, you can move the Downstem Gooce 1 notes for that bar into Upstem Voice 1
b) you’re not limited by the default stem directions - you can always flip the stems using F

I’m also having issues with rests in drum parts. I was able to use the “Extra up-Stem Voice” function to good effect with Cymbal hits creating extra rests, but the blue whole rests in 76 and 78 still persist.

There is a hi-hat playing in that blue voice earlier, I don’t know if that matters, but I feel if I just enter four bassdrum hits in a bar, it shouldn’t create those rests.

The blue voice is probably the default voice - if you were to delete the contents of bars 77-81, the likelihood is that the whole rests left (and the only whole rests left) would be blue. Thus the solution is to switch the bass drum notes into Upstem Voice 1, and then hit F to flip them if that’s what you want.

I’ll be damned, but this did the trick. Thx!
My suggestion then would be to abandon the “upstem” and “downstem” terminology with percussion “voices” (since they apparently don’t have anything to do with the voices in non-percussion parts), and denominate them somehow differently.
Especially since stem direction is kind of flexible and special in drum set notation anyhow. Just an idea to create more clarity…

The problem is, if you edit your Percussion Kit, each instrument has a default voice and stem direction. If by default you want Hi Hats to have stems up and Bass Drums to have stems down, I can’t think of a clearer way than calling those Upstem and Downstem voices. Of course, I’m merely a user and have no say (or no more say than anyone else!) in terms of the direction that Dorico takes.

Fair enough, Leo, and thanks for chiming in again…

Have a great day!
B.

A year and a half later, is there any options I don’t know to do that ? or do we still have to use some shaddy workaround to just hide this rest ?

Having this issue now and it makes my score ugly

There’s not been any change in this area.

There is no music that would ever have these extra rests in a part, but in the land of Dorico you have to wait YEARS for the developers to learn what that looks like so you have a chance of producing a professional looking drum set part. It’s an embarrassment.

The development team have said they’re working on it. See Hiding drum set rests - #2 by dspreadbury for instance.

In the meantime, the workarounds do work.