I am currently having an issue where the audio randomly drops out, I have the driver version 1.10.1 and this driver hasn’t made any difference to this issue.

I only started experiencing this issue two days ago and decided that something might have gotten corrupted on the OS so I reformatted my PC and I’m still having the same issue.

I’ve tried keeping an eye on the error info, but when the audio cuts out, the advanced controls disappear and then I can no longer access it with the shortcut unless I quit them application. 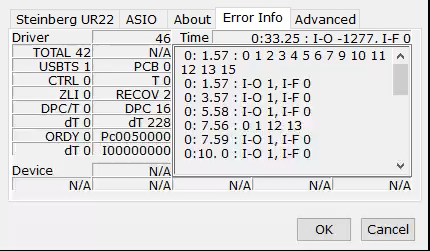 I have attached a screenshot of the window before the program reverted back to the original state.

Its the recent Windows update I have tried everything with no luck. Don’t waste your time, I would buy a cheap temp interface until driver is fixed, going through the same issue my man. Really loved the UR22 until now…Support has been awful too…Picked up Presonus Audiobox until driver is fixed than I will switch back…

Yeah that’s fair, I just checked out the price of the audio box and it was more than what I got my UR22.

I’ll have to have a shop about to see what cheap interface I can get for the time being to tie me over until they fix the issue.