I have a problem with my UR44. I use it mostly as a sound card and as an audio interface for pianoteq on my W10 PC (not so much with cubase) and I just recently discovered that everything is mono when used as a sound card.

I tried with multiple computers and multiple stereo headphones but the problem is always the same. With a youtube stereotest track I can see in dspMixFx (screenshot attachment) that the output should detect stereo but everything is mixed mono (same output from left and right headphones) in the output somehow anyway. I tried with two headphone jacks and the main output - same problem.

I discovered from this forum that mono monitoring is a feature in UR22 but should work as a stereo with UR44. Any tips? Also checked the W10 settings that there is no forcing to mono. 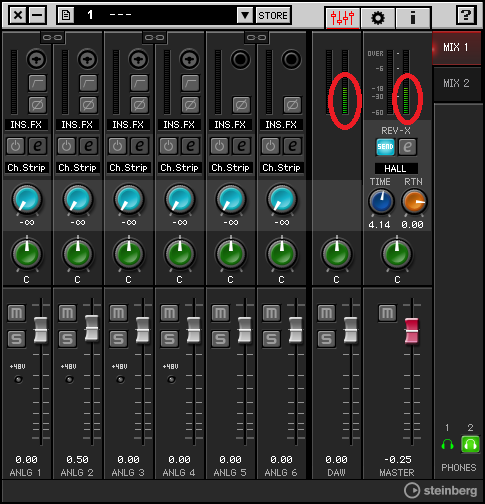 Hej Henri
So in the screen shot you uploaded it looks likte only the right channel should play sound, but you hear the sound in both headphones? If that is the case I would first have asked if you used headphones with a mic, but since you say it happens with all headphones and all computers I want to ask if it is the same when using the line outputs?
BR

Hi, thanks for reply. I hear same sound from both headphones. Headphones are beyerdynamic DT 770 PRO and doesn’t have mic. I purchased today y-cable to connect the headphones to main output and stereo works fine this way. Is it recommended to use headphones connected straight to main output?

So the problem occurs with both headphone jacks on the front panel. I suppose they should work stereo as well?

Yes they should definitely be stereo. And no, the main output is mostly used to drive active monitors or an amp.
I have no idea wat might be going on then, sorry.