I have been experiencing some odd behavior of Cubase 12 in terms of how the DAW controls and keeps the velocity settings.

(Kontakt 6.6 and Kontakt 7) I found this out when I opened an old project of mine, done in Cubase 11 initially. The piano part started to sound as if a random velocity MIDI modifier had been applied to it. On the Options tab of the instrument, in the Expression Control section, some velocity presets (Curved and Comp) had become inaccessible - you would click on these tabs, but as soon as you released the left button, the next tab would become highlighted and active. I tried creating a new project and loading the very same instrument (The Hammersmith piano), but the expression control of the VSTi was as temperamental as it had been in the old project.

(E&W Play 6 engine, E&W Symphonic Orchestra Strings) Unlike the Kontakt issue, Cubase 12 didn’t ‘disable’ any knobs or sliders of the E&W instrument. However, every now and then some notes/sections would sound louder than they did during the previous playback, as if the VSTi had set a new velocity-loudness correlation. I attempted to change the velocity of these rogue notes/sections, but I couldn’t get the VSTi to become consistent velocity-wise. 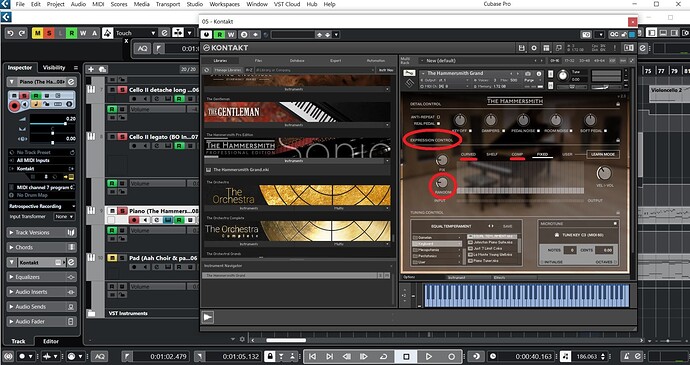