Warning when trying to print parts in concert pitch

I hope that in the two and a half years I’ve been posting to this forum, I have established a reputation for being calm, reasonable, helpful, and above all positive about Dorico to the point of being an unabashed fanboy. But Dorico embarrassed me last night by doing something that is just wrong, and I won’t pretend I’m not angry about it.

I passed out a new set of parts to my players and discovered that one of the alto sax parts printed in concert pitch. After spending time this morning that I don’t really have, figuring out why it happened, it appears that parts — individual parts — print in whatever state (transposed vs. concert pitch) they were in the last time I viewed them. I’m sorry, but what good is an untransposed part (especially for alto saxophone — a major 6th transposition!) to anybody? Ever?

There is already a thread out there (https://www.steinberg.net/forums/viewtopic.php?f=246&t=119412) talking about the same issue with regard to accidentally printing scores in concert pitch. Sibelius and, I’m told by a friend, Finale both give you a “do you really mean that?” warning window if you try to print a score in concert pitch.

But parts? Seriously? My personal opinion is that whatever transposed/concert pitch view you were using the last time you looked at a given part should have nothing to do with how it prints. And I feel even more strongly that I should never have to worry about whether or not selected parts are going to be accidentally printed in concert pitch; I don’t know why, but somehow that’s more infuriating to me than if they had all printed in concert pitch.

In any case, I can say with certainty that from the very earliest days of Finale (I was a v.1.0 Finale user) and in the ten years I used Sibelius, I simply never had to even think about the possibility that a part might print in concert pitch.

I guess I can’t take the position that Dorico shouldn’t allow us to print parts in concert pitch, but it sure as hell shouldn’t do it without giving us a warning window.

Lew, I don’t in any way disagree with the substance of your post, but as an interim measure you might try this: 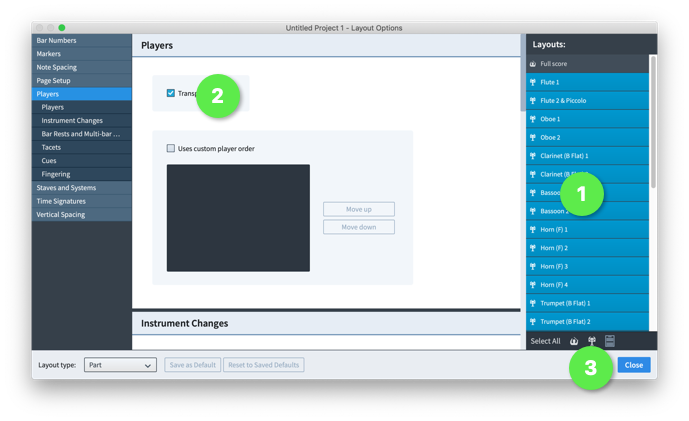 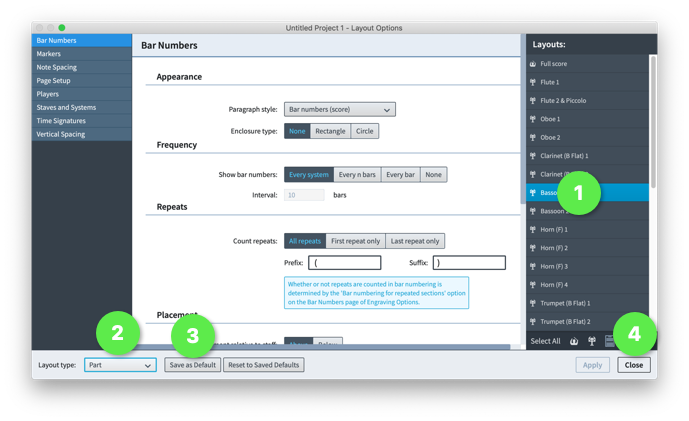 Then NEVER touch the Edit > Pitch options with a part layout open.

Thanks, Leo. But isn’t “NEVER touch the Edit > Pitch options with a part layout open” the part of all of that that really matters?

Nope. There’s the possibility you may have inadvertently set part layouts to be non-transposing by default.

Regardless, I fully see your point. I have my own method of ensuring that I don’t ever print non-transposed parts, but I can see why you’d be mad about the existing functionality.

OK, Leo, I was pretty sure I hadn’t accidentally set the default to non-transposing, but regardless, what you suggested seemed wise, so I did it.

But I also checked all the parts first, and they were all set to Transposed Layout.

I’ve about decided that the whole thing happened because I somehow hit the keystroke that toggles transposed and concert view on one of the part files. I guess that’s one of the dangers of having a single keystroke toggle that back and forth.

Anyway, as always, thanks for the good suggestions.

You can delete keyboard shortcuts that you don’t like, as well as creating new ones.

For example I’ve disabled Z and X from zooming in an out, because I keep hitting them by accident in note entry mode, and in any case my brain is programmed to use Ctrl + and Ctrl - like every other app with a zoom option (except Cubase, apparently, which is where the Z and X came from!)

I’m pretty sure the only way you get a keyboard shortcut for toggling transposed view is by adding it manually. Either that or I’ve messed around so much with my keyboard shortcuts that I’m missing a load that were added by the devs in recent versions…

How do you know if it’s too complicated? If you have to make a KM shortcut that puts a list of your KM shortcuts on the screen.

Ha. There IS a toggle available natively from the Preferences > Keyboard Shortcuts dialog within Dorico - you don’t need KM for this one - but by default it doesn’t have anything assigned to it.

it appears that parts — individual parts — print in whatever state (transposed vs. concert pitch) they were in the last time I viewed them. I’m sorry, but what good is an untransposed part (especially for alto saxophone — a major 6th transposition!) to anybody? Ever?

I’m new Dorico. I haven’t even printed my first project yet, but I find this topic concerning. I’ve read three times of dedicated users posting here who have experienced this problem. These are true horror stories. You can sense the feeling of betrayal in the tone of the post, and no one should ever feel betrayed by their software of choice.

I’ve been known to view individual parts in concert pitch during note entry or proofreading. If I ever have the need to do this, I would hope my software would not discreetly adopt this as my printing preference. That’s what’s happening here. The users who have experienced this problem are completely unaware it has happened until they are at the concert venue!

At the very least, a warning before printing could prevent this potential horror. But perhaps waiting until printing to tell the user a part has been mistakenly left in concert is not the ideal time to remind the user. i.e. one may have been carefully editing an ‘F horn’ part in engrave mode, only to discover at the printing stage that all the subtle engrave work, positioning, etc. was performed on a ‘concert’ part by accident.

Perhaps in addition to a final print warning, our layout lists (wherever they appear in Dorico) could tell us which layouts are ‘concert pitch toggled’ by color. “Oh look, my Bb clarinet part is in concert right now.” This is a constant reminder to address this eventually. I can see it’s been altered by it’s color, alternately it could be flagged’ somehow. The point is, this should be easy to see and correct if desired before printing. Of course, a final print warning message is a well warranted failsafe, but not necessarily the first indicator a user should have that a part has been mistakenly left in concert.

The tiny ‘Concert Pitch’ text in the lower left of each layout is a far cry from being an indicator of potential tragedy. And let’s be honest, these event are tragic in every sense of the word for those who’ve experienced them.

I’m really unsure why you’re even allowed to print a part at concert pitch for transposing instruments. It really doesn’t make any sense to me. I’m sure the powers that be are listening. I’m sorry that this happened to you. Trust me… I know the feeling. I skipped a few heartbeats Christmas Eve.

I understand the concern with being surprised, but there are (perhaps arcane) reasons for printing a transposing instrument in concert pitch.

Over two years ago, I asked for a warning when deleting a player from a flow if that player had music. It was added later on. I’m sure a simple warning at print time relating to parts and their transposition would be sufficient for this.

I’m really unsure why you’re even allowed to print a part at concert pitch for transposing instruments. It really doesn’t make any sense to me.

I’ve often been asked to produce concert parts for a certain trumpet player. I think having a way to print a transposed part in concert is a good thing. It should be possible, but utterly impossible to do by accident. A simple pre-print warning would do the trick, provided that the warning also includes the names of the layout(s) in question. This seems like a simple and valid request.

Fair enough. I definitely appreciate being able to view the concert pitch version; much easier to double check pitches if you don’t read transposing scores well (or if you were given a concert score by the composer to engrave!).

But if there are people who ask for them, then fair enough. Although it does seem fair to say that your example is the aberration rather than the rule. (I sure you’d agree.). But to echo you and Claude, yes, a simple warning would be all that it takes.

That’s all I’m asking for — a warning prior to printing score OR parts in concert pitch.

Just to confirm that I agree a warning would be a good idea. We’ll add something along these lines in future, hopefully soon.

Thanks so much, Daniel. As so many of us say so often, I have never experienced such a responsive company to user requests/concerns.

Lew, this warning dialog is coming in 2.2.10. Just watched the Dorico session today!