Now, do I dare install the tools and risk crippling my interface until the 2.0 firmware download shows up?

@Paul_Tumelty all things considered, you should wait for others to do so and report back.

No. No. No. Sorry to be the bearer of bad news

Would love to see: 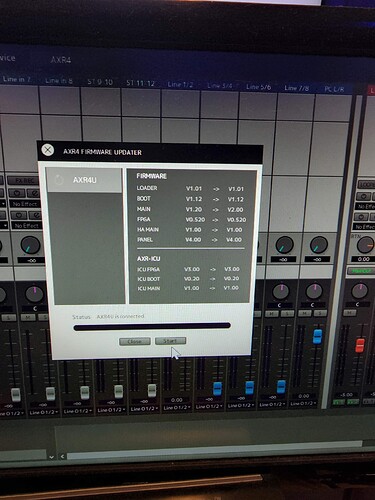 What do you mean by control room routing issue?

One thing that is fixed, is that you no longer have to route something to the stereo out to get the hardware panels to show. This was a problem for people using control room as the outs were assigned there.

Install of 2.0 went well on an Intel iMac running Monterey. I do appreciate not having to set up special outputs for the AXR4 h/w options to show up in the inspector. Really like the addition of the h/w options in the mixer view! Dom does a great job summarizing the other changes (Version 2.0 Update for AXR4 | AXR4 Audio Interfaces - YouTube). Still hoping for more DSP options in the future (e.g. port over the guitar sims, RND Portico, etc.). Looking forward to more updates : )

How very disappointing… so only 1 of 3 items addressed after waiting an eternity for this update? I guess we can only hope that more updates are coming and soon.

Steinberg - how hard would it be to implement a DSPMixFx remote bridge for your flagship AXR product, given that you’ve already provided one for your budget line UR-C series? Customers of that series have had it for years now while customers who have paid 10 x as much for the AXR4 are still begging for it.

Don’t you think there’s something inherently wrong with that? Don’t you think that professional users who have purchased the AXR4 might actually have more use for such functionality than most users of the UR-C?

Features are meant to seep down from flagships to the budget lines, not the reverse! This is my biggest gripe with your approach.

From what I see, most items in this “new” update are things that UR-C customers have enjoyed for over a year now in their DSPMixFx 1.5 update.

Apart from the control room routing fix and main out volume linking (thank you), what exactly have you provided for AXR customers in this update that UR-C customers don’t already have?

“Focusrite Control’s Loopback feature lets you record other audio sources from within your computer (e.g., the audio output from a web browser). Loopback uses the Scarlett’s ‘virtual’ inputs, which have no physical connectors on the hardware interface itself but may be selected in the DAW as signal sources for recording in the same way as any other.”

There’s no such facility to select virtual inputs in Cubase when using the AXR4.

Didn’t you think that recording audio into Cubase from other windows/mac sources might actually be a common use case for many? Didn’t you think that being able to do so without the need to physically route cable was the whole point of loopback in the first place (as touted by other manufacturers a decade ago)?

The trouble is, you didn’t think and then you didn’t listen - when all your customers found out that this wasn’t possible with the AXR4 and Cubase, the natural assumption was that you would endeavour to provide a speedy fix. You haven’t.

Please get your act together!! Please keep the updates coming! What you’ve provided in this update hasn’t addressed very much at all. I don’t think that any of the requests have been unreasonable. What has been unreasonable is your prioritising of your budget line over your flagship customers. That’s unacceptable!

Well said @KLai !!! I Really hope someone from Steinberg is actually reading this!
@Ed_Doll @Stefan_Schreiber

Hello KLai and everyone,

We are very sorry to read about your disappointment. Of course we completely understand that our customers have expectations when a new update is made available. With the Version 2.0 update we definitely addressed several points that were raised by different users.

If some of your top priority feature requests did not make it into this update, this doesn’t mean that we aren’t reading your proposals and wishes. It does mean, however, that, based on the feedback of many users, we identified the most important topics by gathering feedback from all our users — from our user forum, artists and other professionals around the globe.

We are constantly working on providing further improvements and enhancement, so you can rest assured that this will not be the last update. Please continue to post your suggestions, most of which we hope our future updates will reflect accordingly.

We are constantly working on providing further improvements and enhancement, so you can rest assured that this will not be the last update.

Indeed, there will be at least one more in its lifetime!!!

Just being silly after a looooooong day. Fingers crossed for more regular updates for AXR users.

Since it took a almost 3 years to get a significant update for the AXR, is this something that it going to change from now and on please?
Thanks
Avli.

Is there any chance of Steinberg porting the Guitar Amp Classics FX from the UR series to the AXR? I already own the AXR4U and think it’s a fantastic interface, but it seems like an oversight that the AXR can’t be used for latency free guitar tones. If you added these plugins in a future update then it really would make the AXR a perfect recording interface for all my studio’s needs!

I second that we really expect to have such basic features (like Guitar Amp Classics FX) to be present in the AXR4T. Especially after all these years.

Thomann recently confirmed to me that the AXR4T is no longer being manufactured - which seems to go against your “we are constantly working on providing further improvements and enhancement, so you can rest assured that this will not be the last update” statement from 7 months ago. I’m an AXR4U user, but was looking to upgrade to 3 x AXR4T units so I could daisychain them together. It seems that won’t ever be possible now?

Could we get an update from you on the future development/commitment (if any) of the AXR4 units please?

Is the AXR4U the only version that will be further developed?

Will there ever be swapable cards for these units, so we could change them from U to T versions, and vice versa?

Thanks and regards,
Conor

Checking in out of curiosity. A product released in 2019 is on the ropes! This cycle of build and forget from the hardware side is beyond a joke. So few updates, most of the requests ignored. I really feel for those who bought into it. Yamaha have the skill sets required, but it just doesn’t filter through for whatever reason.

Such a huge difference between the Steinberg software team (Cubase/Nuendo/Dorico/ VST Connect etc) we know and love, to the Hardware teams (likely all Yamaha as I understand it) who just give us the impression that they don’t give a hoot about their customers. I call shame on the lot of them.

@Cuttlefish 20 days in and still no reply. Sadly, all too typical.

I truly feel for the Steinberg marketing team, tasked with marketing yet another unsavoury disaster. The hardware side is an unnecessary blight on an otherwise stellar company (Steinberg) and their hard working, and in my experience, super conscientious development teams.

Ordered some new geqr today and asked my retailer about this product and they stated that its not longer available to order. That’s aeither the AXR4U or AXR4T

Also saw this on scan.co.uk and bax-shop.co.uk. I’ve seen other places that still have stock but seeing the ‘end of life’ and ‘Discontinued, this product can no longer be ordered’ statements was a bit of a surprise for a 3 year old unit. 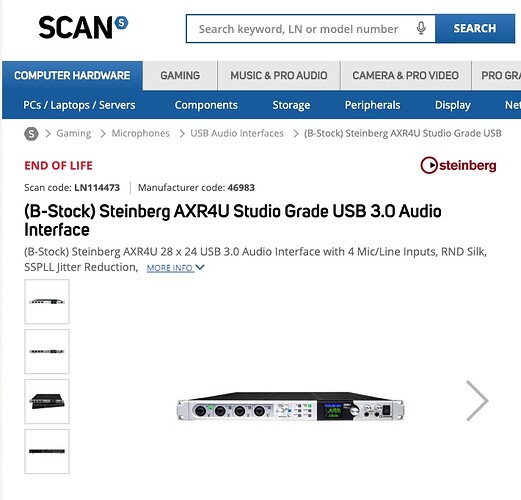 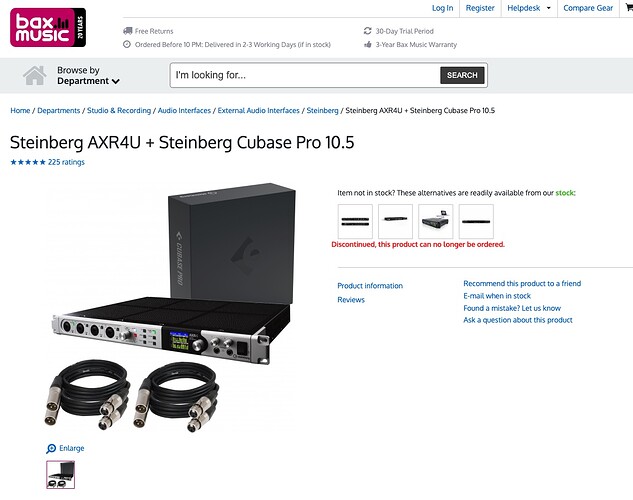