What has happened with my files after the update? 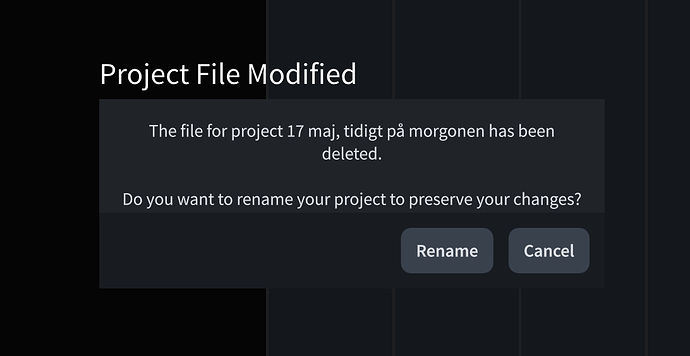 A lot of files disappeared from Dorico for iPad. I have worked on them on both Mac and iPad. Why do I get this message, and what does it mean? Can’t I import Mac files without renaming them?

Apparently there is a big mess with dorico iPad storage in general both in iCloud and internal storage on the iPad, let’s hope they get it sorted out soon

@malmehed, are you seeing that message immediately after opening a project file in Dorico for iPad? Is that project located in your iCloud Drive (or another cloud-enabled folder), or was it from the app’s own storage?

You can tell the difference in two ways: one, projects opened from outside the app container, e.g. from iCloud Drive, don’t show the little hamburger menu in the top right hand corner in the Open Recent page of the Hub. Or, two, you will find projects located in Dorico’s app container in the Files app inside On my iPad, then inside the Dorico folder.

I tried to open a project file stored in iCloud, because all my Dorico files for Mac are stored in the ~/Documents folder that resides in iCloud.

And the project does open, but it then immediately gives you a notification that it has been deleted? If so, although that warning is annoying, it is (we think) harmless. We had a couple of cases of this occur during our testing for this new update but we haven’t been able to figure out exactly what causes it. However, the files are not really being deleted.

I’m sorry for the inconvenience caused. The “Open in Place” support added in Dorico for iPad 2.2 still has some kinks in it that we are working to resolve.

Just so I have understood you correctly: if I don’t change the file name, the project will not be visible among the iPad recent projects, but it will still be present in my iCloud folder? If I change the name, I can see it in Recent projects on the iPad. I have to test this to see if the renamed file shows up in my iCloud folder. I would like to have all my files in just one location if that is possible.

Yes, as I understand it, clicking Rename won’t do anything on the iPad (that notification can appear on the desktop version as well, in which case it will bring up the Save As dialog to allow you to save the project under a new name, but on the desktop it only appears when the file really has been deleted).

The project will still be present in your iCloud Drive folder, but it won’t show up in the Open Recent page of the Hub in Dorico, for reasons as yet unknown.