What would be the best way to create a choir score in this way?

André, the vast majority of my engraving/arranging work is pretty simple stuff, so switching wasn’t a difficult decision. I freely admit that I only managed to remain bilingual for a very brief period - having committed to Dorico, I’ve completely forgotten how to use Sibelius. I posted the following on Facebook a couple of weeks back, and I stand by every word:

"I’ve just spent over an hour tidying up a four page SATB arrangement that some complete idiot originally typed into Sibelius. It’s basically all inaccurate lyric hyphens, ties misused as slurs, slurs that aren’t actually attached to anything, just positioned; dynamics that are actually plain text styled like dynamics.

I could have done this job much quicker 18 months ago, when I was barely anywhere with Dorico and used Sibelius every day, but I wouldn’t have needed to do it at all if it had originally been done in Dorico - Dorico makes it very easy to do this stuff right, and you have to try really hard to do this stuff wrong

Very nice tutorial. It could be edited as an official one and shared by Steinberg

Thank you for your responses, I still have Dorico 1, so the way described above still doesn’t work. I will get Dorico 2 around Tomorrow, though.

Elwin, you may also find this earlier thread helpful.

Leo, can you explain the reason for the Divisi? Why not just 2 Voice players grouped together?

I used this divisi method to create a piano grand staff as done in old publications where the bar lines aren’t connecting the staves, a bracket is used instead of a brace and the movement name is centered as staff label. I would not know how to do this otherwise. Only downside is that the dynamics are placed above the staves, so I use properties to place them Below:

Coming back to this (as it’s now relevant in a live project I’m working on)
Is the flexibility really here?

What I can get using a regular Choir (reduction) instrument is this: 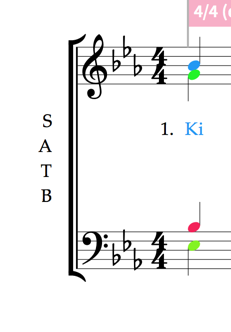 but what I want is: 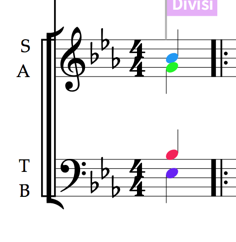 Does the attached work for what you want?
SATB.zip (289 KB)

D’oh. Of course it does. But I guess it’s one workaround (grouping together a Soprano stave and a Bass stave, then renaming them SA and TB) vs. another workaround (using a single voice then adding a divisi, then renaming the individual divisi staves SA and TB). I mistakenly assumed that you meant that there was now a native way of doing this, which I don’t think there is.

Six of one and half a dozen of the other

Yeah, my setup is just a step shorter.

Thank you! Is it possible to make the labels shorter this way? All my systems are now named fully, without abbreviation, even though I have choosen abbreviation in the layout options. Best regards Helge

This is a very old thread, and Dorico has added significant numbers of features since then. Notably, Dorico can make changes to the style and ‘reach’ of individual brackets/braces, which is a much easier answer to the original question than the ‘workaround’ with Divisi.

Just create one instrument for Sopranos and Altos, labelled accordingly; and another for the Tenors and Basses (NB: use a ‘Bass’ Player, not a Tenor), and join them with the style of bracket that you want.

And I’d also suggest selecting the option (pre-supposing this wont mess up other instruments that may be in your score) in the paragraph styles for staff lables to make them center aligned. If you look at the old screenshot above, the S & A are poorly aligned.

I did not know about this - you sir have changed my life, thank you

Thank you, I try this

And I’d also suggest selecting the option (pre-supposing this wont mess up other instruments that may be in your score) in the paragraph styles for staff lables to make them center aligned. If you look at the old screenshot above, the S & A are poorly aligned.

I was just working on a score that I thought would look better with the staff labels having center alignment, and I noticed that option is missing from paragraph styles in Dorico 4. Did it get moved somewhere else, or has it simply been temporarily removed? This, to my eye, looks atrocious and I would really like the ampersand to be centered…

EDIT:
I’m an idiot. (sort of) I couldn’t tell that you could scroll down…

The default presentation of this window in light mode makes no indication that there is more to the dialogue. It is so faint, the modules fit nicely in the dialogue, and there is no scroll bar, thus I had no idea.

I was caught out a week ago by this exact thing, and the only reason I knew to scroll down was I know paragraph styles must have alignment settings.

Clearly the scroll bars in light mode need the same colo(u)r treatment as the buttons in Properties. Thanks for mentioning it.