When switching guitar to 5-staff notation only, I get a residue of the tab staff

I’ve been writing a piece and using the TAB to help me wrap my mind around fret positions, because I tend to make things that are impossible for guitarist. Then when editing the final score, I changed layout options to get rid of the Tab staff, but it didn’t go away entirely. Conversely, if I get rid of the 5 line staff, I also get a residue of it. This is what I see: 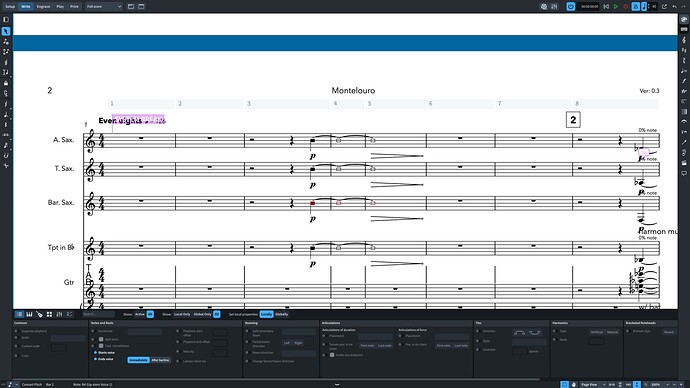 It’s not a big deal because restarting Dorico put all things together again (that’s why the cut-down file I was preparing is useless). However, I just wanted to report it, in case it’s not a known bug.

Hey @lucas_r_r – which version of Dorico are you running? Dorico 4.2 is the latest version.

And can you share the project (or a cut-down version of it), or perhaps elaborate a little more on any specific steps you remember doing that might have contributed?

Hello Lillie. It’s 4.2.0.1092. I was preparing a project to reproduce the issue, only that the issue disappeared. But I’ll try again!

bug guitar.dorico (1.3 MB)
Ok, so it looks that with this project it still happens until you reopen it. To reproduce, go to Layout Options and, in players, go to players and select Notation only for the jazz guitar.

Thanks - this looks like a bug to me. I think it’s something to do with the presence of the slash region in the guitar part, but we’ll take a closer look.