I’ve been using WL11 Pro on my new MacBook Pro 16" running Monterey without problems since overcoming my initial crashes to desktop on launch.

One annoyance that I didn’t have with WL10 is that when a file finishes rendering, the Mac snaps back to the WL11 window.

The result is that when processing files for a montage, say Regions ➤ CD Tracks, I can’t do anything else with the computer because it repeatedly snaps back to WaveLab.

I’ve scoured the preferences menus but maybe I missed something?

p.s. I was hoping this new MacBook Pro would be faster than my 2017 iMac, but I guess it won’t be until it’s off Rosetta.

I’d prefer them not opening at all. That’s how it was for me on WL10.

I’d prefer them not opening at all. That’s how it was for me on WL10.

Ah. When you render the files, make sure this setting is turned off in the Redner Options: 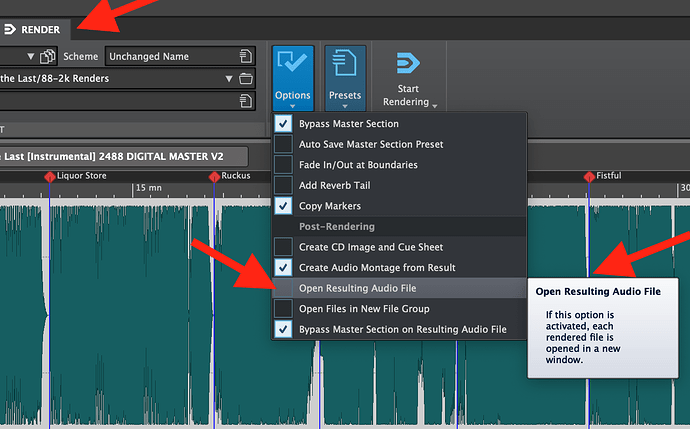 Nice! WaveLab is way more powerful than I need it to be. In a good way.