Working with REX files in Elements

Hi
I currently have Cubase Elements 12 and working with REX files.
There is not much info available on the internet regarding editing REX files.
I want to slice them and copy parts. When i do this the parts don’t seem to play. So either editing functions are limited with Elements or I’m doing something wrong. Any info, youtube videos links regarding editing with Cubase and REX files welcome. Thanks

REX/RX2 files can be imported into Groove Agent SE 5 and Sampler Tracks. In both cases, they’ll be sliced up and ready to play.

Help me out here, please: Does Cubase Elements have the Hitpoint section in the Sample Editor? If it does the slice function basically does what REX files used to do.
When I import a REX file it is actually presented like a regular audio event in the project. To get the REX functionality use the Sample Editor → Hitpoints → Slices. However, that will create slices according to Cubase’s hitpoints, which might be different what ReCycle might have found back then. 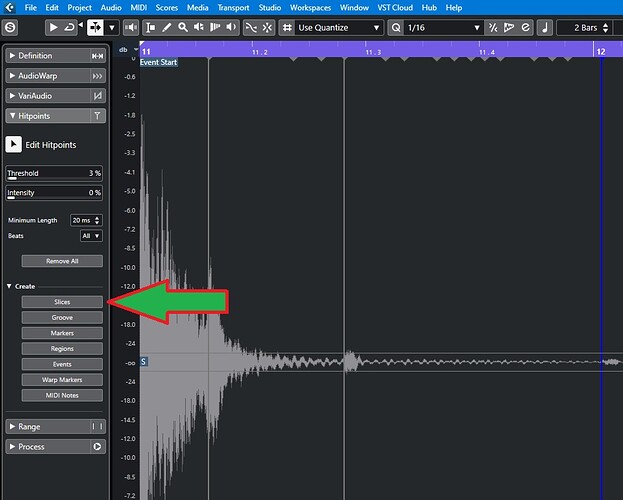 Hitpoints and slicing are available in Cubase Elements, but they shouldn’t be necessary in this case.

REX files should automatically be imported as slices, contained in an Audio Part. It sounds like there might be something wrong with the REX file you imported? Try dragging and dropping the .rex/.rx2 file from the Explorer into Cubase.

That works as long as you don’t have to change the sample rate on import.
Sorry, tried it with a 44.1kHz file and a 48kHz project before.

Hi,
I’ve tried to import it into Groove Agent and it seems that Rex files are not supported. I’ve tried different ways to import it and every time, it just wont let me. So either I’m doing something wrong or its no supported.

I think your REX files may simply be invalid/corrupted somehow.

Try dragging and dropping a .wav file into Groove Agent. If you’re unable to, then you might be running Cubase as administrator which is not recommended.

Hi,
Rex files are fine. I originally dragged them onto audio track no problem. I’ve also imported wav files into GA without any issues either.