Can someone jog my memory regarding the correct way to denote repeats in this situation? The instruction is meant to denote ‘go back twice from here [the end repeat bar] to the start repeat bar, but the third time just carry straight on’. I sensed that the method I chose (see image) couldn’t be correct because Gould doesn’t mention such an approach at all; I can’t find images of it online; and - as I can’t create it from the Repeats popover (that uses a minimum of two brackets) - I had to create my version with Lines and Shift-X text, confirming my hunch that I’m in a minority of one on this.

But it seems to me to be over-engineering things to provide two identical ‘boxes’ (one bracketed with 1,2 and the other with 3) to express such a simple instruction; indeed - now I come to think of it - my bracket on the 3rd time bar is itself probably superfluous and possibly confusing. So would just the numbers alone be enough to express what I want?

Another option might be to go total minimalist and put ‘x2’ over the end repeat bar (with no number 3 at all), a method I’ve encountered in session parts.

(My questions aren’t about Dorio playback, by the way, but about instructions to performers.) 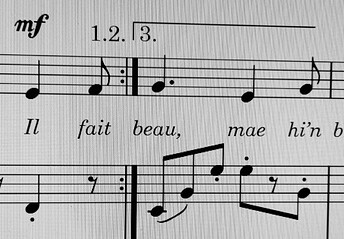 Are you potentially looking for a repeat ending?

For music with repeated passages, repeat endings show which bars are played at the end of each repetition, with different endings each time if required. They are also known as volta lines, or as first and second endings, but in this documentation, we...

Or, changing the number of playthroughs for a repeat barline and showing a repeat count?

Thanks, Lillie. The first of those would need two brackets, but the second method (at first glance) fits my requirements exactly, and shows that I’m not on my own after all! It would be even better, though, to have total control over the displayed custom text: only the prefix and suffix seem to be freely editable, but I’ve failed so far to find a way of hiding the numeral - for example, I haven’t been able to use ‘play twice’ as an instruction.

You can use System text and set the paragraph style to repeat number so it looks identical.

By the way, in your example picture it’s ambivalent.
The repeated section would be played three times, and after that go further.

You also referred to it as

Which is just what a normal repetition symbol without any text indicates anyhow.

Which is just what a normal repetition symbol without any text indicates anyhow.

Oops - of course! I meant ‘go back twice’, which is what I’ve provisionally used. Thanks again.