In Dorico, octave transposition clefs effect playback properly (when used on single staved instruments – a tenor vocal for example). But it appears when applied to either clef of a grand staff (piano), they do not effect playback. Can anyone else confirm this? Thanks.

The “tenor-G” clef does not affect anything; it is the same as the treble clef. It is that the Tenor Voice in Dorico is transposed down an octave.
https://www.steinberg.net/forums/search.php?st=0&sk=t&sd=d&sr=posts&keywords=tenor+octave&fid[]=246

Okay. So it’s confirmed. Thank you. Consider this my vote for all transpositional clefs to affect playback in Dorico. 8vb lines are great for shorter passages, but I find transpositioning clefs preferred for larger sections of arrangements when everything is intended to be pitched down (or up). I’m seeing these kind of clefs more in more in contemporary arrangements. They certainly make low register parts on the piano easier to sight read.

This has been discussed at length, previously, and it’s an intentional design decision.

I’ll just quote myself from a few hours ago, to explain why it’s the way it is:

It’s quite common (and not exactly incorrect) for guitar/double bass/piccolo/glockenspiel staves to be printed with a regular treble (or bass) clef. No double bass player is going to play everything “up the octave” because the little “8” is missing.

If the octave transposition in Dorico was a property of the clef, it would presumably be a different set of users that had to jump through similar hoops.

Okay. Thank you. So what is the best way to use an octave transpositional clef and get correct playback in Dorico? Should I use 8vb lines in addition to the clef, and then hide the lines? Upon experimenting, this seems to work fine for my purposes (I’m using a custom scale at 1% to hide the 8ba line.) Maybe there’s a better solution?

An alternative option (and one that I’ve just tried, and it definitely works), is to put the 8va notes into a different voice (or different voices) to the loco notes, like so:

Then, in Play mode, route each voice to a separate channel (you only need to manually adjust the channel of one voice and Dorico will then automatically split the voices across different channels), like so: 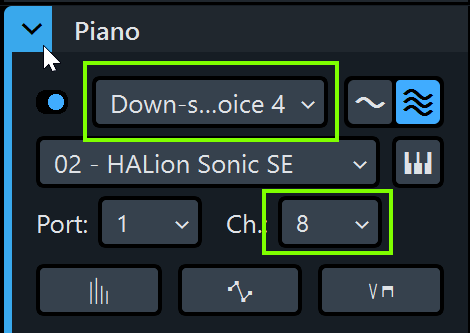 Then, finally, adjust the transposition of the relevant channels/voices, like so: 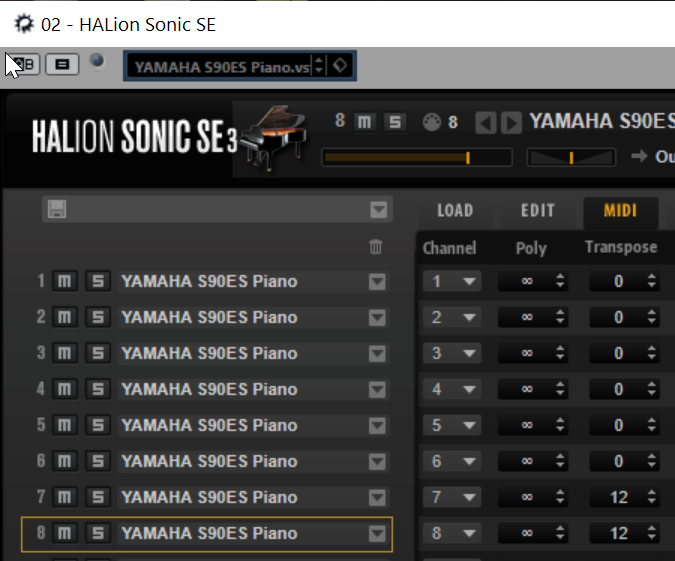 This won’t work for NotePerformer, but should work for HALion. You, as the user, are responsible for ensuring you use the correct voices, but there’s nothing to hide anywhere and once you’ve set it for the project once, it should stick.

(and yeah, of course this example is nonsensical - it’s just what I happened to be working on at the time of typing!)

I must say I don’t understand why weird workarounds are required. Why would one use a special clef that explicitly indicates octave transposition if one doesn’t want any transposition?

I’ve read previous discussions, but they all seem to boil down to “because a few people want it that way”. But why? And why make the weird case the default and the straightforward, normal case a complicated workaround?

To summarise:
Octave lines do transpose because lots of people use them.
Octave clefs don’t transpose because
a) for instruments that customarily transpose at the octave, there’s no need for an octave clef - piccolos/guitars/double basses etc. always sound an octave away from where they’re notated.
b) it’s generally considered bad practice to use octave clefs for instruments that don’t transpose at the octave - they’re easy to miss. Octave lines are the norm.

This is about the many vs. the few, not the few vs. the many!

I also wish the octave -G clefs transposed as they do in other programs (although I rather doubt that will happen–at least not soon), but on the other hand, one could say that using an octave-G clef rather than a normal bass clef on what is presumably the right hand of a keyboard part is also non-standard. Still, you should be able to do what you wish. I hope Leo’s solution works for you.

Those are good arguments against using an octave clef to begin with, and I don’t really disagree with them. But I think the question isn’t whether to use such clefs, but how to interpret them when they are used.

The only rationale I can see for allowing them but then ignoring them is that, if you’re engraving old music that uses them, you might want to preserve the look of the old score, but then ignore the transposition so it plays back as if it’s written in the modern way. But that seems like a pretty small use case. (Maybe I’m wrong about that.)

At the risk of saying the same thing for the third time (on one thread!), it’s not about how to interpret octave clefs when they’re used, it’s about how to handle instruments that should always sound an octave out regardless of whether octave-transposing clefs are used or not.

I can’t think of many symphonic works that don’t use at least one of the following instruments:
Piccolo
Glockenspiel
Xylophone
Celeste
Double Bass.

All of these instruments sound an octave (or two octaves) away from where they’re notated, always. It doesn’t matter whether you use an ottava clef or not. The player will always assume that that clef is intended.

The tenor voice is notated with a treble clef, with or without an “8”, but whether the “8” is present or not, tenors will always sing an octave down. This causes problems in Dorico with the new Condensing feature, but that’s another story for another day.

I assumed billscores meant the bottom staff was notated an octave higher than played, not both staves.

But I did once write a piano part with the text instruction “play both staves two octaves higher than written” at the start, because that seemed like the clearest way to notate it. And to add to the potential confusion, the left hand was crossed over the right for almost the entire piece.

Nah. The right hand part was written to fit the right hand not the left, and the left hand didn’t actually do much at all.

It would have been harder to play it without crossed hands, not easier.

I assumed billscores meant the bottom staff was notated an octave higher than played, not both staves.

Hi Rob, in my posted example, both staves are to be played an octave lower than written. In other words, scoot down on your piano bench and play this an octave lower. Here’s that example again (attached). Believe me, this isn’t all that uncommon, and in my opinion, it’s the cleanest and best way to notate this particular part for piano player/music director. (this part goes on for a couple pages like this before returning loco.) Yes I agree, it’s helpful to explain the operation of these clefs at the moment of their occurrence with a bit of text (i.e. played an octave lower than written).

It may not be uncommon in in your musical world, but it’s not common in general.

AFAIK only one “classical” composer ever did this - Britten, in a few of his later scores - and (thankfully IMO) nobody copied the idea.

Mind you, it’s not as dumb as using Î in the middle of the staff (not even above it!) to signify the start of an 8va, and the inverted symbol for 8vb, which another 20th century composer invented (and which also, thankfully, never caught on).

Besides that, the 8 in those cue-sized clefs is almost invisible.

An alternative option (and one that I’ve just tried, and it definitely works):

Thanks PianoLeo. I’m a Note Performer guy. Anyway, the hidden 8vb line works fine for my needs. (I think I got the “1% custom scale trick” from you anyway on a previous post, so thanks for that )

I understand your argument on why these clefs will never effect the playback in Dorico. I was just surprised to discover it. Now I understand the rationale behind it. Still, Dorico is pretty damn smart about a lot of stuff. Perhaps one day it could recognize that if I start an instrument with a regular G clef, and then introduce an ‘octave up G clef’ mid-flow, this means I want the music to sound an octave higher at that new clef – Maybe that’s too much trouble. No worries.

Besides that, the 8 in those cue-sized clefs is almost invisible.

Yes I would prefer those 8 double or triple in size. Thank you.