I notice that on the Dorico Hub, the News panel is full on my Mac but empty on my Windows (7) version. Just wanted to make sure you were aware of this.

This will be because Dorico is prevented from fetching the RSS feed from the Making Notes blog. You might want to check your firewall settings.

I notice that on the Dorico Hub, the News panel is full on my Mac but empty on my Windows (7) version. Just wanted to make sure you were aware of this.

This is a long standing issue with Cubase. If you google it you have enough reading material for a week. The Cubase fix (remove qtNetwork4.dll from the windows/system32 folder) didn’t help for Dorico though. Might be something related.
Firewall settings are ok here, but no hub.

The Steinberg Hub in Cubase and the Steinberg Hub in Dorico are completely independent, similar in name and purpose but separate in implementation. The Dorico Hub works absolutely fine on Windows: if you’re not seeing the entries in the News panel, it’s because your computer is blocking the retrieval of the RSS feed, most likely through your firewall or through another piece of software you have installed to prevent applications from accessing resources on the web.

Thanks for confirming this. But just like the Cubase issue it’s probably happening on W7 systems only. Dorico Web Helper is allowed access through the firewall and I also added Dorico itself. Still no go. Haven’t installed anything that to my knowledge should interfere with RSS. But by all means, getting this fixed is NOT a high priority!

Having the same problem here on my Windows 10 machine

The News Section in the HUB is not working here on WIN10 64bit.
i reinstalled, added Dorico to the firewall, turned the firewall off, no newsfeed …
what can i do?

Thanks for an answer

This will be because Dorico is prevented from fetching the RSS feed from the Making Notes blog. You might want to check your firewall settings.

Sorry, Daniel! I, at least, need more help than this.

What should I be looking for that might be preventing the display of News? I am on WIndows 10, 64-bit. Of course, it is always possible that I have disabled some feature of the OS that enables something I dont want, but which is necessary for the display of Dorico news.

It’s hard to give any definitive advice because it depends on the firewall or AV product you are using. Try opening the firewall/AV application and see if there’s anything in the log that shows that it’s filtering out connections either from the Dorico application or for the URL http://blog.steinberg.net/rss

I am using Windows 10 without any other AV products. It runs its built in Windows Defender, which looks similar to Microsoft Security Essentials that I ran with Windows 7, though I believe it is improved.

I searched on RSS and the attached panel came up.

Mine is a totally vanilla installation of Windows 10, except that I may have turned off a crucial privacy control. Surely your engineers who work with Windows know what it might be that is preventing Dorico from working as designed under these circumstances.

I am happy to work with them if they tell me what to do or look for. 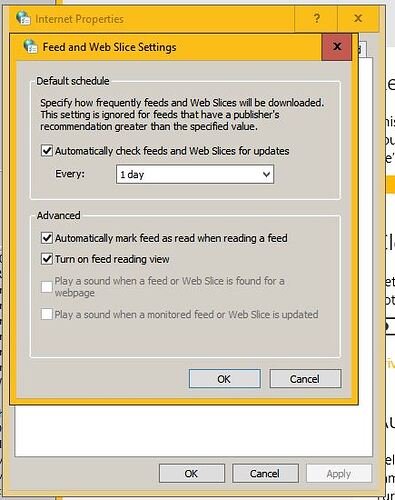 If you’re using Windows Defender and MSE then those themselves shouldn’t cause any problems. It’s hard to give any more advice at the moment as we still don’t know what causes it. However in the next update I’ve added a bit more error reporting so you’ll be able to post your application.log file and it may give us a better idea of why it’s failing.

Thanks for your swift response, Paul – this is one of the reasons why Dorico has a bright future! Let us know how to use the log file in due course, so as to help nail this problem.

I’m on Win10/64(home) and I also use Norton as my firewall/AV software. I just edited the firewall to allow dorico.exe through without being blocked. Still no news in the hub.

dhbailey52
Same for me - I’m on Windows 8.1, Norton configured to let Dorico.exe through. No news in the hub.

When we post the log file, so we simply add it as an attachment to a message here? I know the log file isn’t useful for this problem yet, but when it is I’d like to know what to do with it to help solve the problem.

Yes, that’s right. It’s in %APPDATA%\Steinberg\Dorico\application.log. Just post it here after the next update is available and we can investigate.

The Cubase solution (which I mentioned earlier in this thread) is pretty bizarre. Hopefully the Dorico solution will be less so…

I fired up my Windows computer yesterday (running Windows 10) in the hopes that I too would be able to reproduce the problem that so many Windows users appear to be experiencing and not see the news populated in the Hub, but it worked perfectly. I am very curious to find out what it is that’s causing it to fail on apparently quite a lot of Windows computers. If the 1.0.10 update gives us any clues, then hopefully we’ll be able to fix it in 1.0.20.

I’ll add my name to the list of empty Hub news users.

I’m on Windows 7, checked all the usual possibilities, and my Cubase hub has always worked OK.